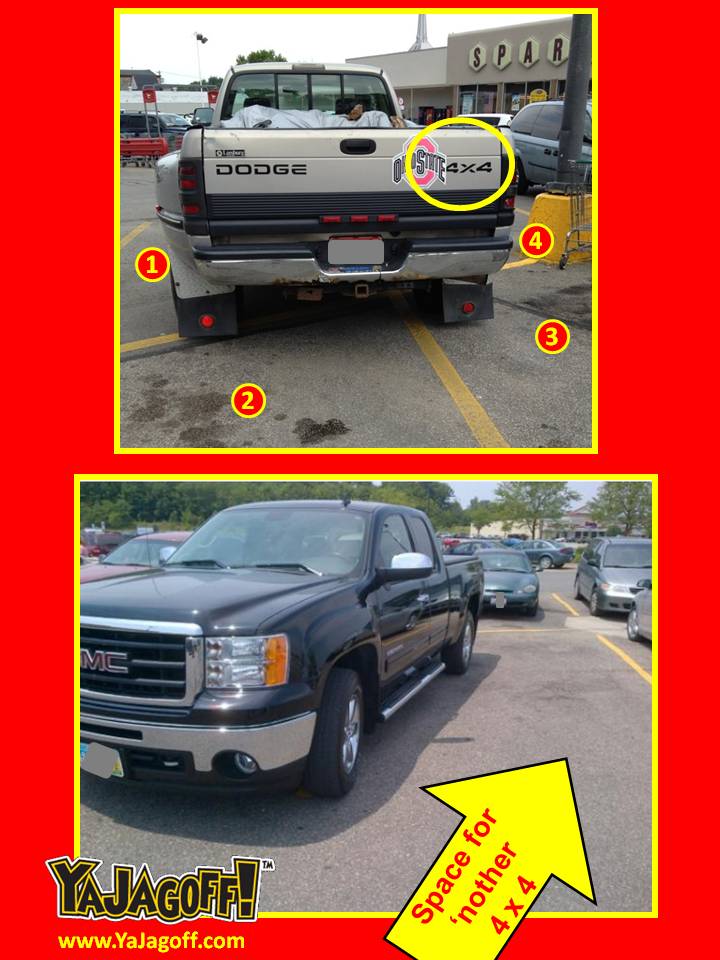 We are absolutely astounded how many people in Pittsburgh DON’T know how to park.  Now catching these “Peter Parkers” is spilling over into Ohio.  That’s right, Ohio isn’t just for driving slow in the fast line anymore.

Look at those big boys in the pic and how many spaces they have.  One of them was in Cleveland (caught by a Pittsburgher Ex-Pat) and one was in the Andover, OH area (caught by a Pymatuning Spillway tourist).  While we BELIEVE that both of these trucks were parked by women, we were unable to verify that the women were moms, therefore, we cannot make any jokes about “mother-truckers.”

Some subtle observations to these drivers:

Were you worried about someone scratching your truck? Because you’re lucky no one rammed a shopping cart into it.

The “4×4” markings on you truck aren’t a set of parking instructions!

Do you sit in four chairs at dinner or just lay across the entire table?

Do you lay on four towels at the beach?

First, we suggest bicycles for your future vehicles, they’re “greener” than those gas-guzzling 4×4’s and they are waaaaay easier to park!  We also suggest entering the Ohio Driver Protection Program cuz,  between being a Browns fan and parking like that, there’s really no hope for you in your current identity.

Special thanks to  @Newshutr   for being our Honorary Jagoff Catcher today!!!