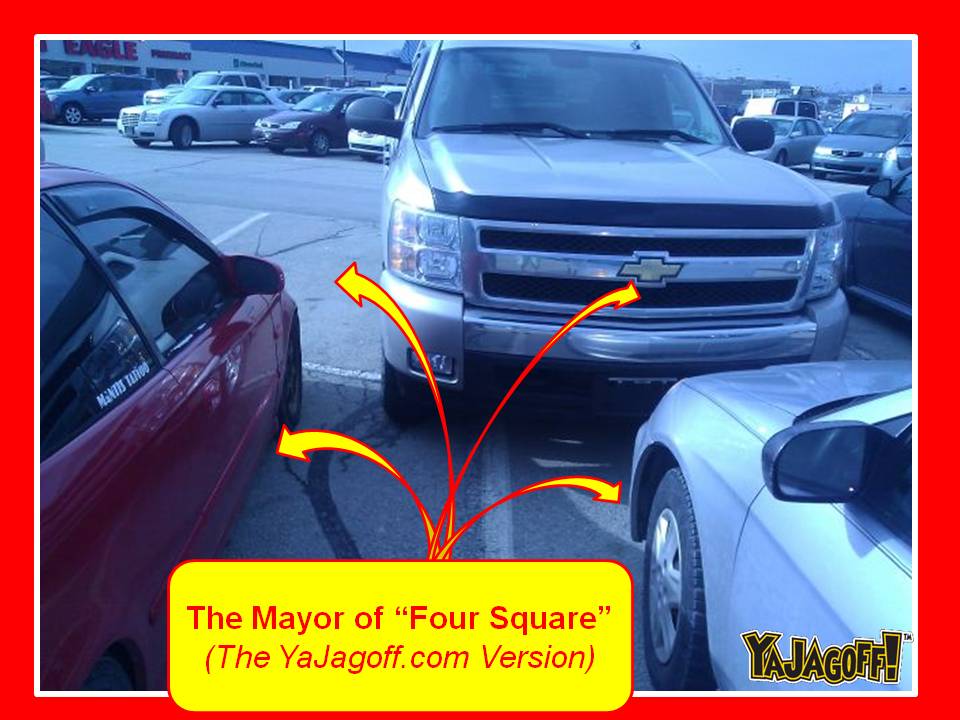 One note:  If you see Twitter follower, Damaris, CONCENTRATE ON YOUR DRIVING!!!!

She has been on fire sending us driving/parking Jagoffs.  And some of them are too good NOT to post!!!  Like THIS one!!!  The SUV in the pic has taken 4 parking spaces!!!!!

God, how we searched for good excuses on this one because, we NEVER really want to believe that people are just this stupid or mean orrrrrrrr incapable of driving like a normal human being.

Here are some of the excuses we passed through our Jagoff committee:

There is that childhood game called “four square” where 4 kids stand in four adjacent boxes (quadrants) and bounce a ball to each other, trying to get the other players into “duns.”  Just like there are “hockey moms” that block the walkway at the ice rink while “Jr” unloads 189lbs. of hockey equipment by himself, this VERY WELL could be a “Four Square Mom” parking job.

There is a place, techinically in Utah, called “Four Corners.”  The Four Corners is the only place in the United States where four states (Arizona, New Mexico, Utah, and Colorado) come together at one place.  A person can stand in four states at the same time.  Just like travelers from the West Coast suffer “Jet Lag,” this VERY WELL could be a case of “Four Corner Lag” where the person THINKS sitting on the crossmark of four painted lines is “SUPER COOL.”

This driver is a HUGE fan of the social media game “Four Square.”  If you are unaware, this is a location-based social networking website for mobile devices. Users “check-in” at venues using by selecting from a list of venues the application locates nearby. Each check-in awards the user points and sometimes “badges.” (Wikipedia)  Given that, this could VERY WELL be like that one Facebook friend that takes Farmville much to seriously and thinks that they REALLY ARE a farmer…maybe this person REALLY thinks they are “The Mayor” of this parking lot!!!!!

OK.. none of those really work out.  All we know is that, people in Pittsburgh need to learn how to park, cuz, Damaris is out there with her camera-phone and she’s trying to be “The Mayor of Jagoff-ville” Ya Jagoffs!!!!!!

Thanks one more time to our Honorary Jagoff Catcher, Damaris !!!!