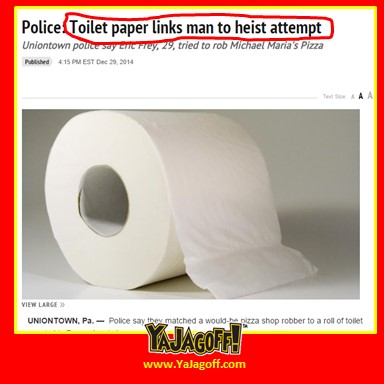 Yeah… but the linkage via the toilet paper was not how you might suspect like DNA or stuck to the heel of his shoe.

29 year old Eric Frey ALLEGEDLY hands the pizza guy a note announcing his intentions of wanting $300 and that he had a gun.

Eric Frey gets caught by police still in the pizza shop because they’re fast to respond to a panic button notification.. well, faster than the pizza shop person was at reading Eric’s note on the toilet paper.

The problem is, ya know when you write with a pen on something soft, how the impression bleeds through? Well, guess what the police found on the E-man’s TP at home?

HINT: It was not the winter emergency shopping list of  more toilet paper, milk and bread.  But the total of cash needed was right on target, $300!

E-man, (calling ya that cuz we feel like we could be buds) too bad you didn’t go to Catholic grade school with me and take Sister Lucy’s hand-writing class.  The police would have never been able to track ya because, in her writing class, she would pull the short hairs on the back of your neck if she found you pressing too hard.

And we’re not ones to do stupid jokes so we will refrain from stating that, it looks like you made an IMPRESSION on the cops and, on good behavior, perhaps you can get your record WIPED clean but, right now, you’re kind of in a pile of CRAP. Where in the world did you learn that write-on-TP trick?  For crissakes, do you know how much I got yelled at, as a kid, for using a half roll of toilet paper because I didn’t want to get a speck of poop on my fingers? My mother would have you water-boarded for wasting toilet paper on a silly robbery note!

Next robbery job—–go steal some photo copy paper from your job or the local library so that you have some legit scratch paper at home, Ya Jagoff!

You can order the Book of Jagoffery, click the pic 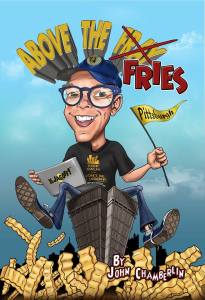