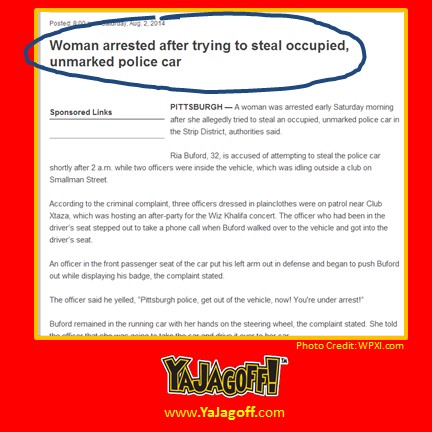 I almost missed this story.  I heard it on WPXI as I was getting out of the shower, knew it was perfect, but had nothing with which to make a note.  Thankfully I was able to get a memory refresher from WPXI.com and every other “Dumb Criminal” news website around the country.  I have now purchased Crayola Bath Tub markers (64 pack) to make sure I never am without the ability to take a note!

So you’ve seen the Sears Optical TV commercial where the lady jumps into a police car mistaking it for a taxi, RIGHT?  (Click the video below to see the commercial if you need a refresher.)

Well, in a “real-life-imitates-TV-commercial” story,  a woman in the Strip District jumped in a car to drive it, ALLEGEDLY, to where her own car was.  The bad news is, the car was an unmarked police car.  The even MORE bad news is, there were two undercover police officers sitting in it.

You will also be shocked to find out that this woman ALLEGEDLY smelled of alcohol.

No word on if the woman had mistaken it as an UberCar or a Lyft vehicle.    Also no word on if the undercover police car  lured her in with a fake “lyft-like” mustache on its bumper!

Hey Ria-ria-mamma-mia, good to hear that there was nothing in the police report about you cracking yourself up, in the “borrowed car” with all of your “I’m-glad-those-stupid-donut-eaters-didn’t-catch-me” stories!!!  That could have gotten ugly.

Fortunately his thing has an easy fix.  First,  slow down the drinking to a point where you’re just trying sweet talk a taxi driver into hitching a free ride.  Second, and this one is REALLY novel, don’t try to drive ANY car while you’re ALLEGEDLY smacked up with I’m-all-hotted-up-for-a-big-weekend-night–out fu-fu drinks, Ya Jagoff!