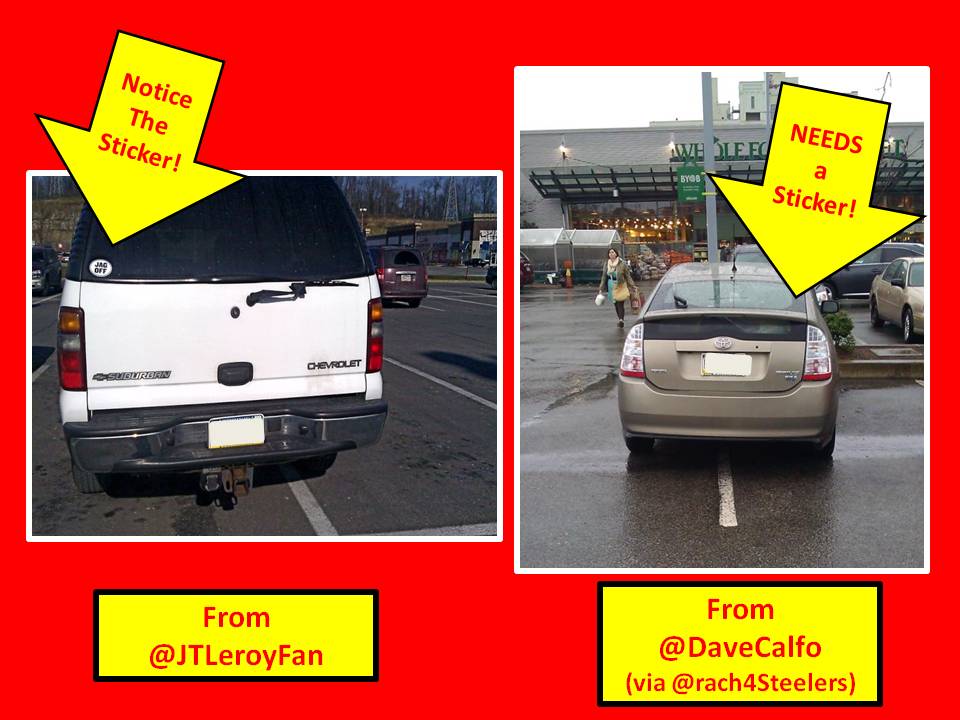 We received both of these pictures in the same day.  If you’re a frequent reader, you know that Parking Lot Jagoffs are posted here even more frequently than ol’ Roger Go-Ta-Hell the NFL Commissioner.  That’s sayin’ something!

We like the whole, “Chicken or the egg”  premise of photo #1 above.  There’s actually a JAGOFF sticker on the back of the car.  The question is, did the driver park there and then someone tagged them with a Jagoff Sticker or did they already have the Jagoff Sticker on the car and decided, “Hey, I am what I am!”

Picture number 2 came with the best, most descriptive tweet:

(If you need a twitter crutch, SMDH = Shaking My Damn Head)

What a PERFECT question.. WHY?????  Why is it that we get so many photos of people that have no idea what parking lines mean in Pittsburgh?  Are we that poor at pulling a car in between 2 white lines or are we that DISTRACTED when we’re going everywhere?  Are Pittsburghers that ignorant that they just don’t care if someone else has room to park?

As kids, were these people ALSO horrible at kicking field goals between two upright thumbs when playing that paper football game where you slide the that odd triangular chunk of notebook paper (that looks nothing like a football but we always drew threads on the side of it) across a desk or table?  In previous posts, we have made so many suggestions on what to do with these people including outfiting all parking lots with those bumper-bowling rails to help people park.  We are out of answers except for making these people ride Segways – all winter long, including riding them accross the Smithfield Street Bridge on a blustery day.   Maybe we need to throw in the “terrible PARKING towel” on catching poor parkers.

No wait, Dave Calfo, Jagoff Catcher of the pic above at Whole Foods is a well known Pittsburgh SALVAGE ARTIST!  As it says on his website:

As a salvage artist, I take the discarded remains of the past and transform them into art that tells a story of the past, present and future. The purpose of my work is to show that objects considered garbage by most can  be turned into objects of interest, desire and beauty.

Ahhhh.. now we have a thought!  Pay Dave to run around the City keying on Jagoff Parking jobs like these.  He won’t have to “shake his head in disbelief.”  He can simply pull up, NOD his head, considers the poorly parked vehicles as “Discarded Remails” (Similar to Eminent Domain) do his work on these cars.  Maybe using his cutting torches to split them in half right along the white line?  (That’ll teach ’em) Maybe Dave can turn some of them into large planters right there in the middle of the parking lot?

The issue is, if the City paid Dave to do this, we get so many Parking Jagoffs that Dave would end up on the top of the Pittsburgh Business Times Book of Lists “Highest Paid City Employees” list.

So what is left to say?  Our second Jagoff Catcher of this post put it perfectly:

(The sticker says it all.) “Nice parking job, ya jagoff.”

Make sure you check out Dave Calfo’s on-line studio and thanks to him, @rach4Steelers and @JTLeroyFan for being Honorary Jagoff Catchers!!!