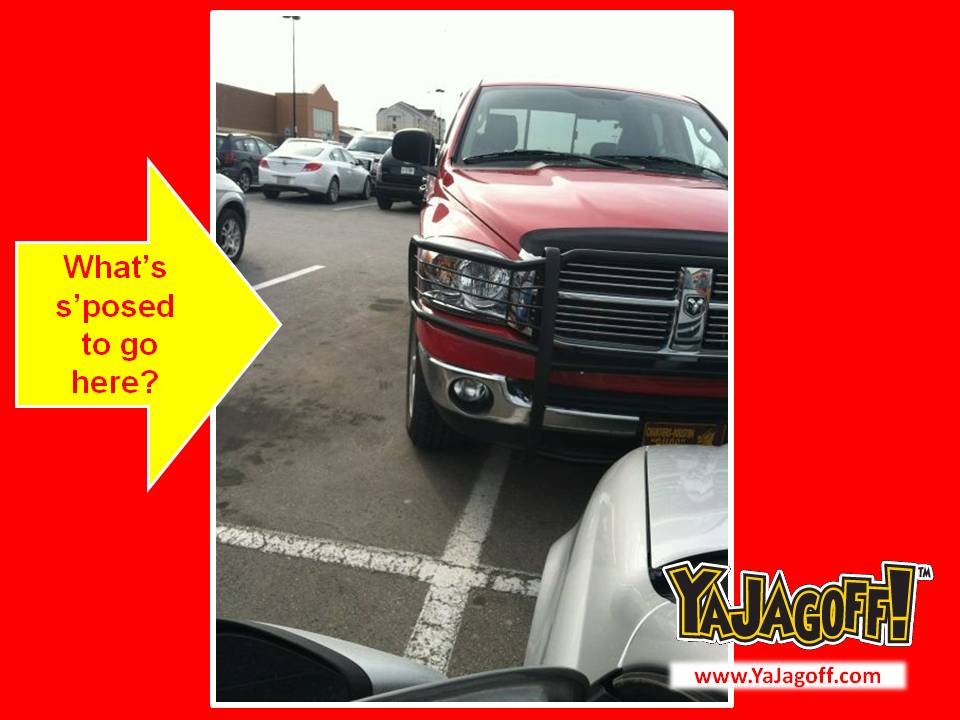 It’s another week and, once again, another person that CANNOT park!  How many snarky posts can we be expected to come up with for this stuff?
It’s like continuing to make fun of your dad for only wearing his bathrobe with no briefs when he goes out on Sunday morning to crouch down and pick up the newspaper as the neighbors are driving to church.  It gets boring after a while and you just accept it.

This was the tweet that came along with this photo:

As most of the regular readers know, we try and give everyone a chance to explain themselves.  Can someone REALLY be this horrible at parking???  The driver left enough room for 2 smart cars next to his truck.

Did he have to run into the mall to pee?  Was there a purse-snatching taking place and this person jumped into action like a here?  Did his gas guzzler just happen to run out of gas as he was in the middle of parking?  Plausible!

How about THIS?   The driver thought he was parking his truck somewhere on the new Facebook Timeline and he became TOTALLY confused on what to do, where to look and became completely disoriented to the point of having vertigo and he got sooooooo frustrated that he walked away before he threw his truck against the furthest wall.  Very plausible!!!!!!

Ok, so that’s just us living out our recent Facebook pain through this guy’s horrendous parking skills!

Hey Little-Red-Riding-Hoodlum (did ya like that one?), have ya ever heard of that truck-driving song, “Give me Forty Acres And I’ll Turn This Rig Around?”  We hear the size of a man’s truck makes up for what he doesn’t have in the you-know-what department… yep, you guessed it, we figure you have a very small EGO!

And we’re thinking, with all of that shiny ginger bread on that big ol’ truck, the only time you get that thing dirty is when you drive through a suburban neighborhood puddle or when the you kick up some dust in your climate controlled 3-car garage.

This kind of parking ALSO tells us that you probably spend a fair amount of time, at home, cleaning up pee stains  from the floor around your toilet given your inability to hit a large target, Ya Jagoff!

Thanks to WDVE morning show producer, @DVEproducerJess  for snapping this pic AND to one of our fav Jagoff Catchers, @Cliqueasaurus, for encouraging her to pass this on to us.