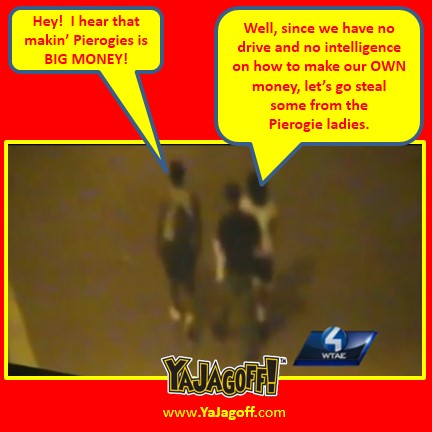 Hey.. we don’t always post robberies here because they can be too common unfortunately.  But this one is at one of our FAVORITE places AND the story of Piergoies Plus is one of good stuff coming from good, hard work!

3 young guys, out roaming the streets decided to walk into the place, while the cook was alone and demand money. Even to the point that they put a gun to the cook’s head and fired a shot trying to be tough guys when the cook couldn’t open the safe.

The good news is… nobody got hurt… except maybe one of them HOPEFULLY when the dove out the back, 2nd story, windows when the police showed up.  The other good news, they left some evidence according to a report by WTAE’s Marcie Cipriani (see full story here).

But what strikes a nerve on this story, in particular, is how the ladies that own Pierogies Plus became successful.. immigration to America, dedication to religion, hard work and walking the talk.. supporting their faith and supporting other friends and immigrants by employing them.  Could they have cried “hardship” at some point in their lives?  Could they have roamed the streets and tried to steal other people’s hard-earned money?  OK.. maybe THAT’S taking the story a little too far for some church ladies from the Rocks Bottoms!

Look at this pic of some of the Pierogies Plus staff… they could all be your grandmother, aunt, uncle, etc.  They’re all so damned CUTE! (See the entire staff photos here) 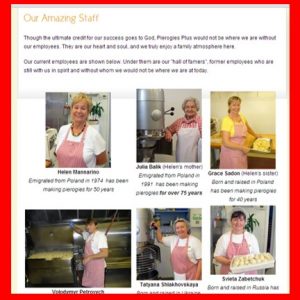 And these 3 knuckle-headed kids stole money from them!  Please be sure to watch the video .

One of them, we will now call Cinderella, lost his nice white shoe, one of them was intelligent enough to wear an identifiable Langley shirt and all of them walked through the Rox, getting captured on multiple security cameras on their way to heist money from some older, hard working, immigrant ladies.

To the 3 of you, since the ladies of Pierogies plus are religious, we will be nice…so we hope that when you get caught, you don’t go to jail or juvenile detention… we hope that everyone of the Pierogies Plus staff get to take their turns banging your knees, elbows and ankles with rolling pins for an amount of time equal to that which you scared the daylights out of their worker.  And then, before you are taken to get X-rays, you actually have to stand on your feet and work an entire day AT Pierogies Plus, in your bruised conditions, to see how hard someone actually works to make their OWN living so that they can enjoy life with their families. And for that we PRAY, YA JAGOFFS!!!

NOTE: And just in case you didn’t realize, YES, “Law Abiding Citizen” with Gerard Butler IS one of our favorite movies.