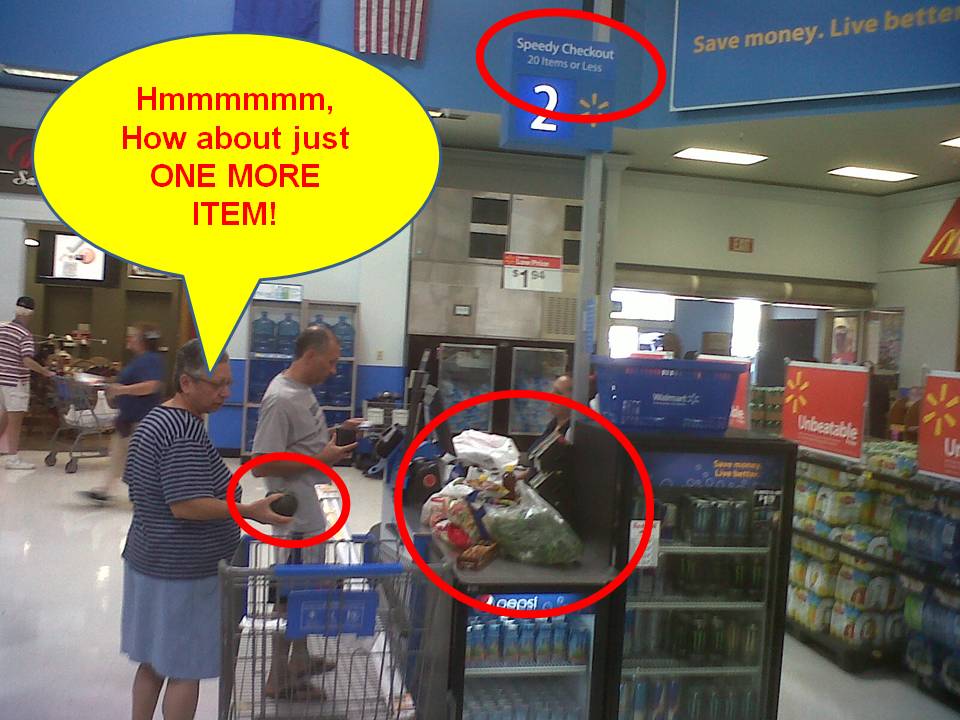 (This is taken by a Pittsburgh ExPat at a Las Vegas Wal-Mart.)

The funny thing about THIS incident is, while most “Express Lanes” have a limit of 8 or 12 items, THIS ONE is 20 items – and this couple STILL went over the limit.  By the way, how is it possible to be “EXPRESS-LIKE” if you have 20 of ANYTHING unless they’re 20 of the same item and the checker-outer can scan one and hit the “Times 20” button?

We actually experienced a local express-lane miscalculation spat between two people in line once.  The guy behind the the lady-that-had-rounded-up by a dozen items or so called her out right there in line.  She said, “Well if they’d open more lanes, than I wouldn’t have had to get in THIS line!” (Haaaaa… THAT’S IT… blame someone else vs. just saying, “I’m sorry, I screwed up.)

We’re concerned that the lady in the Vegas Wal-Mart’s definition of “1 more item” might be the whole case of Pepsi next to her!  Maybe it’s a Vegas-thing where people don’t actually recognize numbers unless they’re on a deck of cards or on a slot machine.

So Mr. and Mrs. Twenty-Something, “20 items or less” means ROUND DOWN – unless your sneaking in a 2-for-1 special (See, we’re flexible).  In the meantime, we’re glad to see you were using plastic to pay as opposed to being like those people that wait until the grand total comes up to decide to take their checkbook out of their purse and start writing OR look through 6 pockets for coins that add up to exact change, Ya Jagoffs!!!