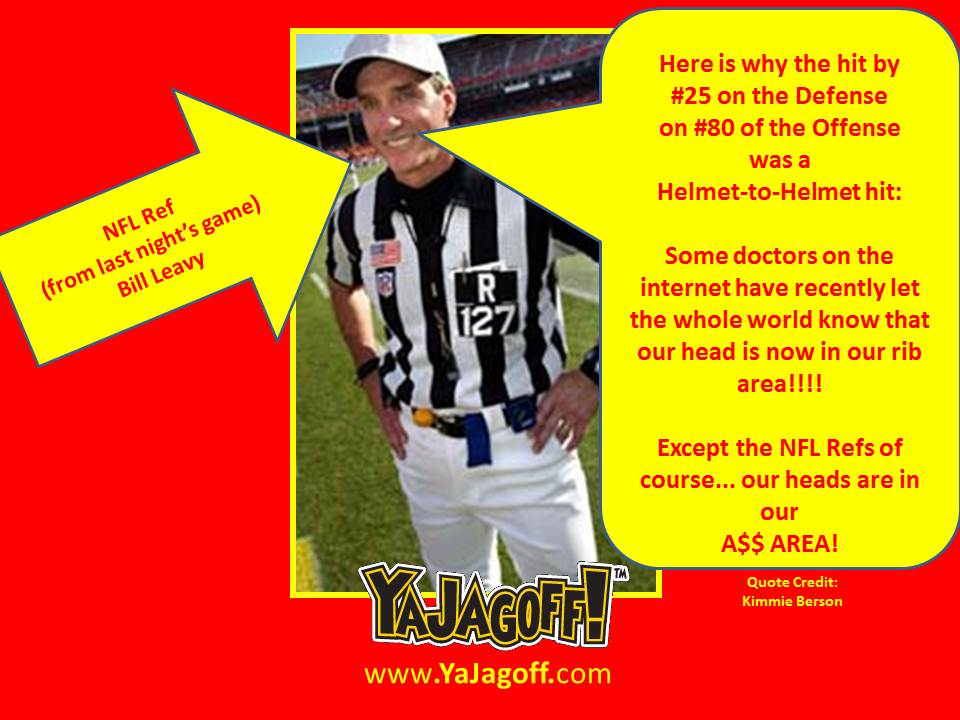 WHEW!!!  The Steelers played an awesome football game yesterday and nearly lost…… (and here it comes)…. because of the referees!!

There it is!  At the risk of sounding like a total HOMER or HOMIE (we’re not quite sure the difference between the two), we said it!!  And were fully prepared to write a blog against the Non-Replacement-But-Seemed-WORSE-Then-Replacement-NFL-Referees of the Steelers/Giants game yesterday.

A call against Steelers’ Keenan Lewis for pass interference THAT CLEARLY WASN’T!

Later on in the same set of plays, Ryan Clark was called for a Helmet-to-Helmet hit THAT CLEARLY WASN’T.. especially given the fact that the Giants’ receiver Victor Cruz’ medical report was SORE RIBS!

The Steelers’ Heath Miller, was blocked in the back on a kick return that CLEARLY presented itself by Heath falling AND the Giants’ player throwing up his arms in the “Hey! Wasn’t ME!” format as Heath Miller was hitting the deck.

But MAYBE, just maybe the NFL Refs were NOT the biggest Jags of the game….um…this is kind of embarrassing cuz…..um..ya see… under our own rules of engagement…. well.. um… WE deserve a Jagoff post mention.  See our tweet below from during the game. 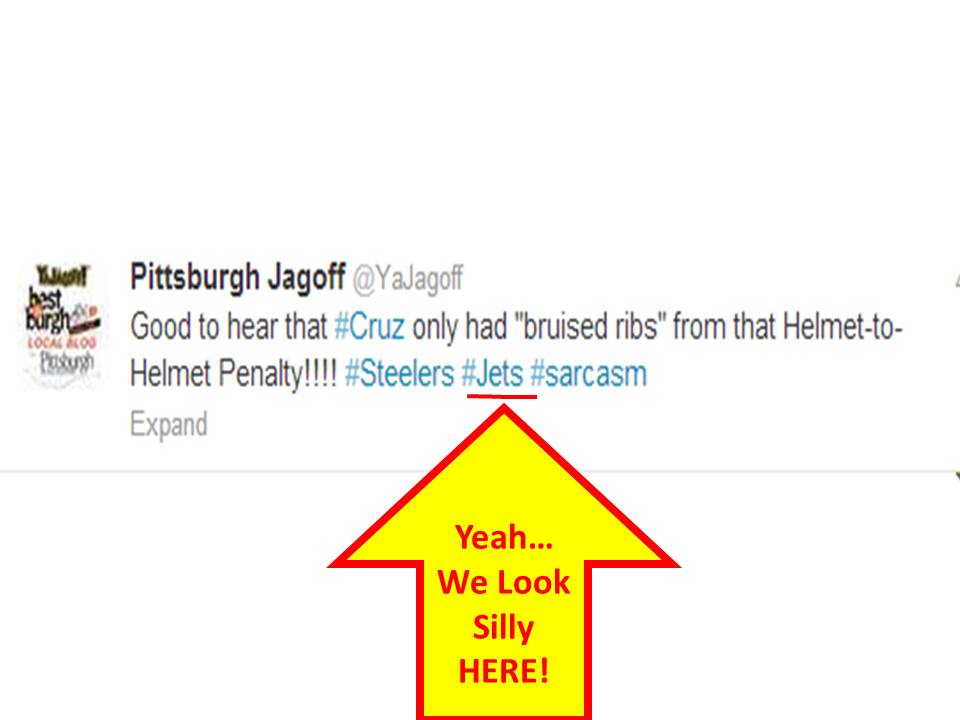 Do ya see what we did there?  Trying to be SMART and FUNNY and…. well….we Tweeted #JETS while the Steelers were CLEARLY playing the #Giants.  Guess where OUR heads were when we were trying to by funny?? (Just like an NFL Ref)

So lots of folks will call for a “conspiracy theory” against the Steelers by the NFL refs…we’re not ready to go that far but it’s pretty obvious that the whole, “We’re-Glad-Your-Back-Cuz-The-Replacement-Refs-Didn’t-Know-A-DAMNED-Thing” love for the OFFICIAL officials is loooooooooooooooooong gone.

So to Bill Leavy and his NFL officiating crew, who, yesterday, raised the ire of Daniel Casciato THE most mild-mannered person we know, while you’re in New York City, paaaaaleeeeeeze march your striped shirts into Roger Go-Ta-Hell’s NFL Commissioner office and renegotiate that new contract for VISION BENEFITS COVERAGE!  Yes, it’s an old joke but, you really do need help with your myopic conditions.

And to us, known as “Ya Jagoff,” how about paying a little bit attention to the details.  It’s REALL hard to be FUNNY when you’re STOOOOPID on details, Ya Jagoffs!!!

Thanks to Facebook Follower Kimmie Benson for the quote we used in our title graphic.  And thanks to Daniel Casciato for being the Honorary Jagoff Catcher and the first of MANY suggesting that yesterday’s refs be today’s Jagoff post!