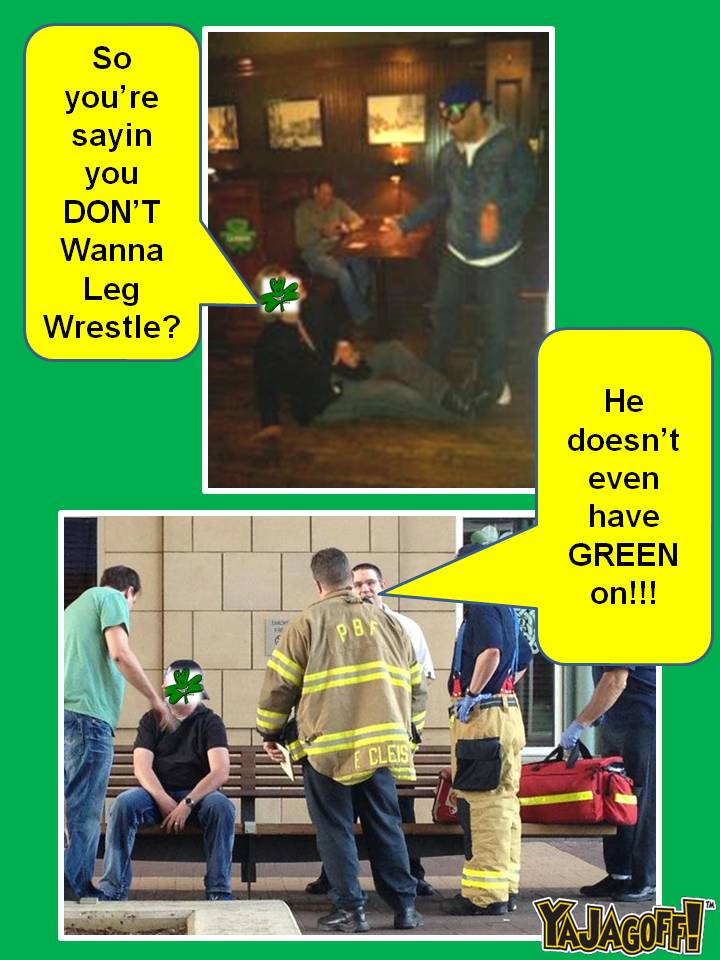 Saturday we put a Facebook and Twitter call out for St. Patrick’s Day Jagoffs.  Our followers did not disappoint.  Above are two of the pics we received.

The top photo came all the way from Los Angeles and here’s the note that explains it:

This guys was challenging his friend to a leg wrestling match……at 715am.

7:15am, and he’s already on the floor challenging someone to leg wrestle which, sounds a lot like ANOTHER infamous drinking game, that SEEMS like good idea when you and your buddy are drunk, called, “Let’s see who can punch the hardest.” THAT game usually ends with two best-buddies in the hospital getting stitches in their respective faces.  And if you wnt proof that this guy IS drunk this early, NOTE, he’s sitting on a bar floor that NO DOBUT has seen it’s fair share of errant natural and manufactured fluids and other substances!
Then we have a pic from outside Pittsburgh.  Here’s the note:

This man was WASTED outside of the Tilted Kilt last night at 6pm!!!!! The fire dept, EMS, and police were there with his drunk ARSE.

There ya go….. a nice, sunny day to relax on a bench but you drank soooo much that your body can support itself about as well as a rubber band standing on the Mt. Washington overlook deck in a 60mph wind gust. You’re so far drunk that the fire department and EMS had to come and babysit you while other people took your picture!!!!!  (We were nice enough to cover your face for two reasons, public drunkenness and, that fact that when you tell your wife the ambulance picked you up outside of Bettis’ Sports Bar, nobody can prove you were REALLY at the Tilted Kilt checking out scantily clad 21 year olds!)
St. Patty’s day, or is it St. Paddy’s Day????  Well, either way, it did not disappoint us for some entertainment and neither did our followers.
Hey Floor Boy, you MAY gave been wanting to leg-wrestle but let’s be more reasonable and say you were trying to do a horizontal version of River Dance!  And Bench Boy, well, it’s never a party until the Fire Department is called, right??
And to you both, what is it about St. Patty’s day that makes ya feel you’re a bottomless beer pit with a liver the size of Connecticut, Ya Jagoffs?
Thanks to these Honorary Jagoff Catchers, Bill H. of Cheap Shots Comedy Group for the L.A. hook-up and  “Julie” for the Pittsburgh pic.
You can see some of our other Drunk Jagoff posts here.
In this article: Jagoffs, Pittsburgh, St. Patrick's Day