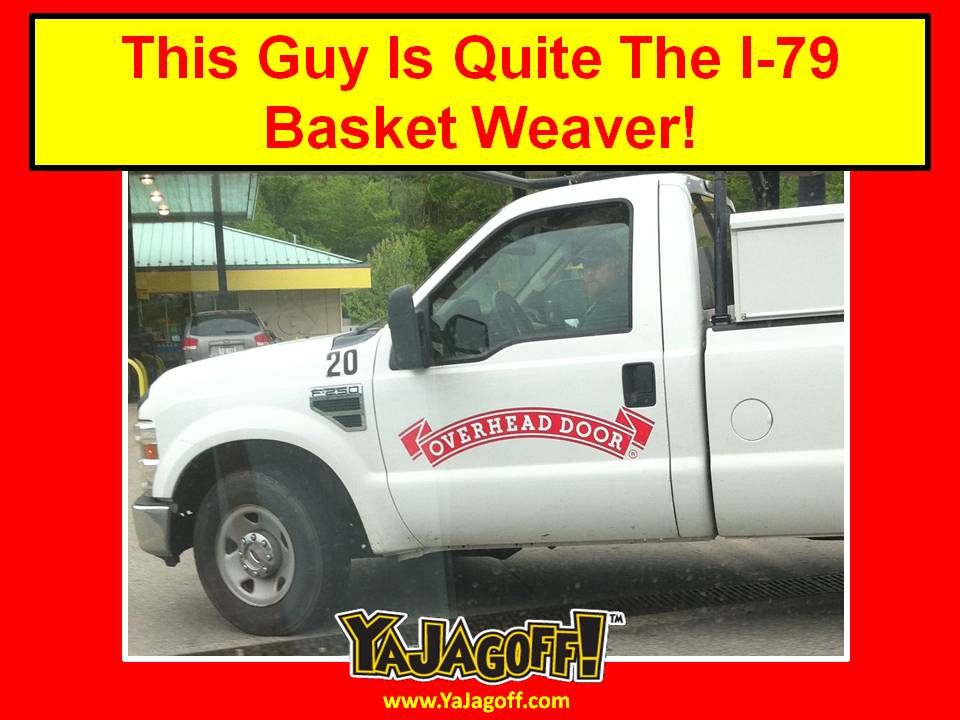 Another trip to Charlotte, NC, another bad-weather drive for some reason!

A long time ago, we learned to not be over-reactive to these kind of drivers.  For example, when we were teenagers, we drove a priest to the airport in HIS car. After we dropped him off, we were driving home, had another driver cut us off, so,  we gave him the finger. After we PARKED the car we realized the car we had been driving still had a “CLERGY” sign in the dashboard!!

So back to Mr. Overhead-Door-Truck-20-Guy…. he comes up on our right and cut us off as he moves into the left lane.  He squeezes in sooooo close to us that I’m pretty sure he bumped my toe with his fender!  He continued weaving in and out of traffic like as if we were watching the DRIVING version of the Ken Melanie/Jeff Romoff battle.

We tried to catch up to him and get some video but he was driving too crazy, we figured, LOST JAGOFF!

But THEN…. as we were taking an exit to refuel, THERE HE WAS… taking the same exit as us, getting ready to refuel.  So we gave one of those “Hey there friend!” beeps on the horn and, VOILA, he turned for the pic!!! (Not sure why he didn’t smile.)

The Jagoff gods were smiling though, on US… even through the rain and fog!

So Mr. Overhead-Door-Truck-20-Guy, hope the Tom-Cruise-Mission-Impossible-Stunt-Man-Test was fun for ya.

Or wait!  Maybe you had a good excuse like, you had the same Taco Bell burrito 2 exits before that WE had!!!  If THAT’S the case, we hope you didn’t “Claude Giroux” any little kids or grandpaps on your way to the gas station restroom key.

We didn’t realize that there were such things as garage door installation emergencies but, clearly, you had one that day.  We have, no doubt, that, if your bosses see this, they will be VERY PROUD of how eager you are to service your customers, Ya Jagoff!