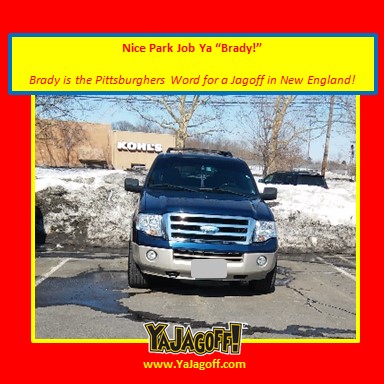 It’s been a while since we posted one of these (a #PeterParker) on the blog and, this one is good because.. it’s a burgh person embedded in New England.  Boy, that has to be about as uncomfortable as 4 hemorrhoids after a day full of eating jalapenos. But, our Jagoff Catcher stands tall.

Here’s the message that came with the pic:

I was pulling into the parking lot of my local Stop & Shop (the grocery store chain out in CT), and I happened to notice what appeared to be an empty space next to the cart return thingie. I pull around, and lo and behold, some Jagoff in an SUV has taken up two whole spaces by parking on the space divider between them. I called him a Jagoff (out loud but in my car), and took a picture. Just wanted to let you know that Jagoffery is alive and well in New England!

Well… indeed it is and we are proud to have you on the SJU – NE (Special Jagoff Unit New England) squad! Maybe in New England we should refer to Jagoffs as “Bradies.”

Thanks much to Serina Q. from New England for being our Honorary Jagoff Catcher!