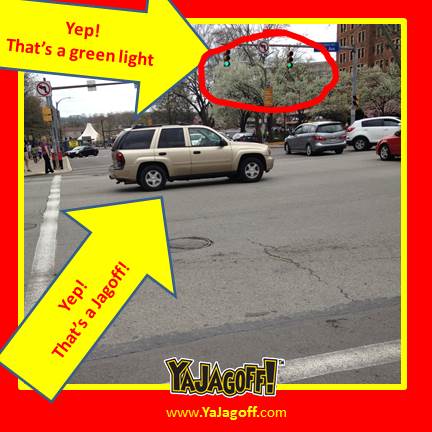 Ok.. let’s just keep this simple because you can CLEARLY see what is happening here.  Yes, as if Oakland traffic around the University of Pittsburgh needs another excuse for traffic jams other than the 1,021,021 buses that stop to pick up riders just as the intersection lights turn green!

Now THIS guy has to feel important and pull into an intersection on a Yellow Light and… well… who would have ever thought… the Yellow Light turned  to a Red Light on him!!!!  Whooda thunk?????  Now he’s just left sitting there…. right in the middle of, well, EVERYONE!

Hey Tahoe-Terry….. nice work!  No man is an island, BUT, when you have a complete lack of respect for traffic and traffic lights, some men become, well.. you know where we are headed with this dontcha????

FYI, Tahoe-Terry, the 39 seconds it takes to sit at an Oakland Red Light plus, maybe, another 6 seconds for the Yellow Light has got to be a better gig than the horns, dirty looks and fingers you received from the oncoming drivers.  And by the way, be sure that, when you get to your destination in Oakland, that you DON’T pull off to a parking area, make sure that you pull just to the right of the road causing even MORE traffic jams due to your complete lack of consideration for others, Ya Jagoff!!!