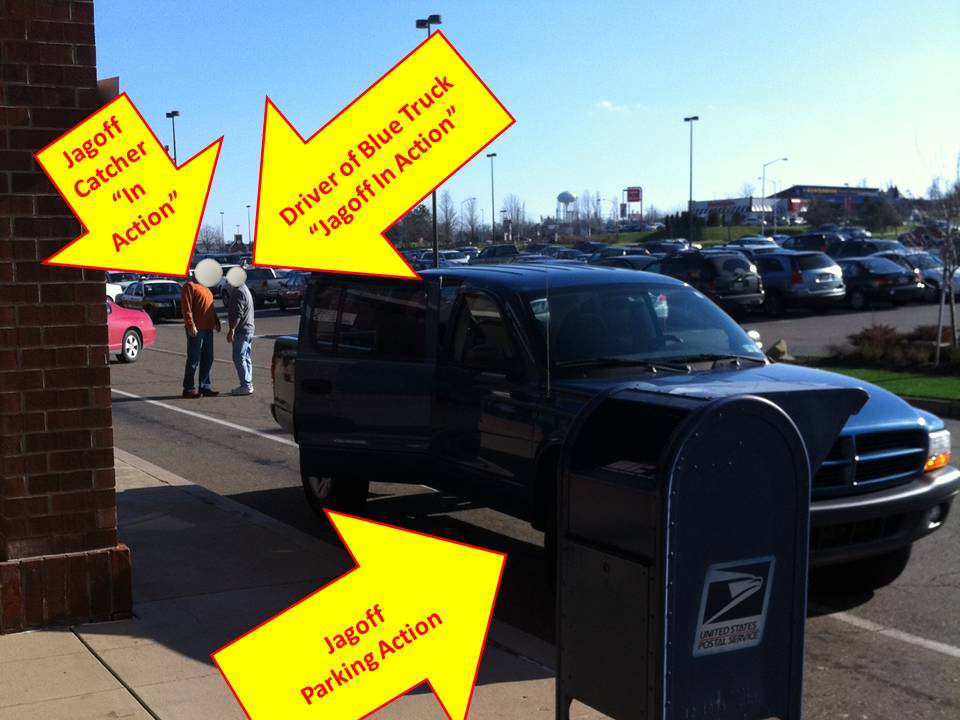 So this is a “Jagoff Catching” in action!!!

Let’s set the scene.  Guy driving blue truck pulls up to mail box.  Does he use it?  NO!

He actually goes into the Post Office and needs help determining the most appropriate box to use for shipping.  After he receives his consultation from the counter staff, he fills the box and then goes back to the counter to send it and pay.

The entire time, is his blue truck parked in a legit parking space?  Nope!  It’s parked right in front of that, um,  drive-by, mailbox.

While Mr. Blue-Truck-Driver is inside the Post Office, a senior citizen woman, who wants to drop something in the drive-by mailbox, has to stop her car, get out and walk her mail to DRIVE-BY mailbox.  She’s more angry than the lady in our old neighborhood that used to confiscate our baseballs and wiffleballs every time they went in her yard when we were kids.

Enter Jagoff Catcher guy who goes into the Post Office and loudly announces, “Whoever’s driving the blue truck, nice move parking in front of the mailbox, YA JAGOFF! Some old lady was trying to use the mailbox!”

Mr. Blue-Truck-Driver casually completes his important postal business, walks out to his truck and then gets into a yelling match with the on-scene Jagoff Super Hero who’s still jawing at him about his parking choice.  Here comes the point of no return…..Mr. Blue-Truck-Driver actually DEFENDS his actions at a hate level greater than Pittsburgh hates Todd Graham.

Realistically, all of us are capable of a Jagoff Move every once in a while.  The difference between a “mistake” and a true Jagoff Move (and the opportunity to be posted here) is, whether or not you’re contrite when called out!  Did Mr. Blue-Truck-Driver say “Hey, you’re right!  I’m a Jagoff for parking there?” NOPE.

Mr. Blue-Truck-Driver, you looked tough in front of the family explaining why you box-blocked an old lady!  You actually would have looked MORE like a man by accepting the fact that your not quite as important as you THINK you are and used one of the available parking spaces that were a mere 30-40 feet away.

First, we hope that you’ll take yourself to Jagoff Rehab.  We suggest this website:The Pittsburgh Dignity and Respect Campaign.

Second, we hope that, in a few years, when your older-man-over-active-bladder-issues flair up and you DESPARATELY need the GetGo gas station bathroom key, that little old lady is in line ahead of you trying to purchase 6-months worth of lottery tickets based on her dreams and random thoughts and paying for those lottery tickets with pennies and nickles.

Yeeeeees, Mr. Blue-Truck-Driver, we know you don’t really need a key to use the GetGo bathrooms. But it sure is fun picturing you struggling, squeezing your dinky-doo like a 2nd-grader while you’re waiting for THAT lady to move out of your way, YA JAGOFF!

Don’t forget to go to our store and order your t-shirt!  Proceeds still go to

Click the pic below to get to the store.