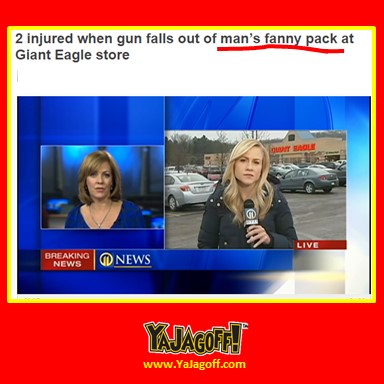 This excerpt from Mike Hasche at the Trib (WPXI News Partner) kind of says it all:

Two people suffered superficial wounds from what appeared to be pieces of ceramic tile when a gun accidentally discharged as it hit the floor of a Giant Eagle in Richland.

The owner of the gun, who was “very upset and apologetic to the victims,” was charged with simple assault and reckless endangerment, a criminal complaint states.

This story had a good ending, THANKFULLY, in that nobody was injured and no animals were tortured for the story.  That, leaves it open for posting here as jagoffery.

Wait! No, that’s not right.

The REAL debate here is, “Should  a Man (or anyone for that matter) Wear a Fanny Pack?“

I mean, MAYBE if you needed something (back in the 1980s) to put your Kennywood ride tickets in, or your rolled up dollar bills that you specifically saved for Potato Patch Fries, chap stick, neosporin, bandaids and your Nokia flip phone, (you know, the phone where the only game on it was SNAKE).  Other than being at a retro Halloween party and or having a disability that requires you to have one, we can find no reason, that is not criminal, to be seen wearing a fanny pack.  I mean, get yourself a back pack and carry on one shoulder for cryin’ aht lahd!

Hey Fanny-pack Fred, yes, you should have been more responsible at securing your properly permitted weapon, but GEEZ…why do you even have a gun?  Nobody wants to steal your neosporin, bandaids OR your FANNY PACK, Ya Jagoff!

You can order the book by clicking on it below.

Rachel, email us at YaJagoff (at) Verizon (dot) net, subject line SHOT GLASSES and give us your address. 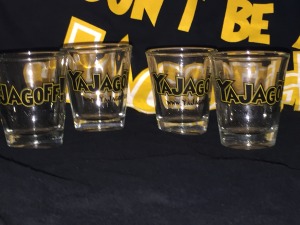