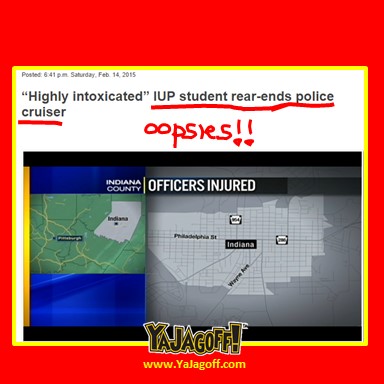 Around 2:30AM , allegedly, 2 IUP students drove their car into the back of a PARKED police car. (Thank goodness  those STRICT IUP curfew rules.)  Even better, one of the students allegedly became belligerent with the police officers while they were investigating the oopsies.  See full story on WPXI.

Guessing those high-speed parallel parking classes aren’t going so well or that the self-parking car research isn’t going as well at IUP as it is at CMU. Also guessing that the next call back to home is going to be a little uncomfortable…”Well, ya see…me and my buddy rear-ended someone when we were drunk…” (and then the conversations goes completely different than what they originally gasped about on the other side of the phone.)

On the upside, the police officers were not seriously injured.

On the downside, we’re hearing UNFORTUNATE rumors that you guys were cracking yourselves up with all of your “What-were-those-stupid-doughnut-eaters-doing-parked-there-anyway” stories.

The final good news… we doubt this will affect either of your chances to be valedictorian speakers at your commencement ceremony in the spring of 2032, Ya Jagoffs!!!