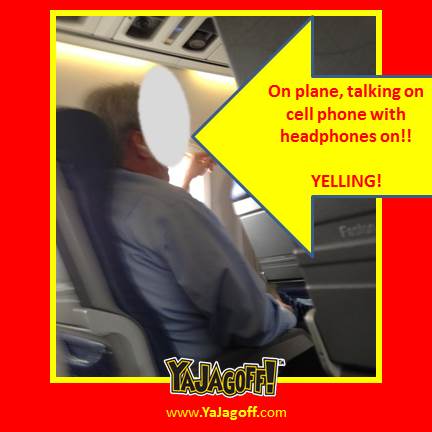 I posted apreemptive strike of this cat the other day on Facebook and Twitter when flying back home to Pittsburgh. But just had to give the details.

If you have ever traveled on a plane, you know this person or his com-padres

The best part about this guy was, his attitude.  First, he had both headphones in his ears. Have you ever sung with headphones on?????  Yep, you got it… LOUD and AWFUL!!!

Everyone’s looking at the guy… as he continues to talk as he moves his nicely folded sport coat around in one of the overhead compartments so that someone doesn’t wrinkle it with their suit case.  The conversation continues without a missed beat.

Then, as the flight attendant gets on the speaker to make announcements about preparing the cabin, storing your bags, etc… it is apparently disturbing to him so he speaks EVEN LOUDER!!!!!!!!!!!!!!!!

That was the breaking point… I leaned forward, tapped him on the shoulder and told him he was really loud.  He looked at me like I had, not 2, but 9 heads!!  But he did carry on his conversation in softer tone.

Thankfully we were ready to close the cabin door and turn off all electronic devices because nobody was able to capture a picture of me being passed over the heads of all the other passengers, mosh pit style, in a “we’re glad you shut him up” celebration!!!

Hey Mr. I’m Important On A Plane….. next time you’re updating the boss on your numbers, we suggest you invest in one of the “Get Smart” Cone of Silence devices or, better yet, take your conversation to a far corner and, once the plane boards, let the person on the other end of the phone call know you will call them back AFTER YOU GET OFF THE AIRPLANE THAT IS FULL OF PEOPLE THAT DON’T WANT TO KNOW YOUR CONVERSATION.  What did you do before cell phones, Ya Jagoff?