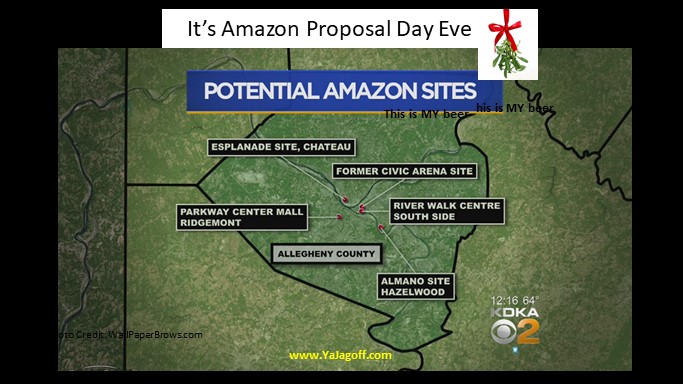 For weeks we have seen the Pittsburgh pleas for Amazon to claim home with its second headquarters, and now we are a day away from “P” day.  That is in proposal.  The day in which ironically, “P”eduto  and company have to submit deserving reasons for Pittsburgh to become the Amazon hotspot.

Pittsburgh is home to 306, 000 plus people all with unique reasons for Amazon, some economic and creative, some just plain selfish.  But with only 24 hours left, we find ourselves sitting at #5 among 8 cities fighting for the favorite hotspot to be Amazon’s #2. Over $200,000 was spent to create the campaign to conquer Amazon.  Certainly the fact that we are now a tech-savvy, medicine-centered, film-successful, food town that has been voted most livable city and one of the best places to live at all ages has been factored in.

What is not to love about the ‘burgh?   With 24 hours left, out of 8 possibilities, Pittsburgh sits pretty at #5 to be crowned location #2 for Amazon.  The most unique scenario in this number game would be to have #26, Le’Veon Bell himself hand deliver a couple dozen pierogies, a handful of terrible towels, and some 84 Lumber gift cards, thanks to Joe Hardy, while being driven in a Molly’s Trolley.

So what lucky traditions will YOU utilize on this P-Day Eve? Seven fishes? Eat pork and sauerkraut? Mistletoe? Wave a terrible towel? Where your fav never-washed game-day Kris Letang jersey? Tell us below in the comments!

Tell us below in the comments!