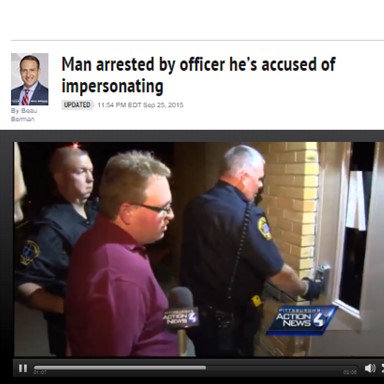 In the picture above is Justin #1 (burgundy shirt) and Justin #2, police officer holding on to Justin #1.

As it turns out, Justin #1 ALLEGEDLY got on line and met with a woman saying he was a police officer…and not just ANY police officer.  He said he was police officer, i.e, #Justin #2.  All of this took place in the tiny little town of Mount Pleasant Borough.. total population.. um… some number small enough that pretty much everyone knows everyone else.  Ya know, a perfect place to impersonate someone from the same town (allegedly).

At press time, our SJIU (Special Jagoff Investigative Unit) had not confirmed if the suspect was in possession of one of those big rolls of sticker “Junior Police Officer” badges at the time of his arrest.

When police officer Justin (#2 in our story) started getting texts from said female about their romantic encounters, he thought that to be a little odd and a little disturbing.  That’s when it all came to a head and now Justin #1 is being charged with impersonating a police officer and bunches of other stuff.  The cool part is, on the WTAE video,  when asked by the reporter Beau Berman about what’s going on, #Justin #1 says “I’m just trying to figure out why I’m here.”

C’mon #Justin #1… don’t you watch the TV?  The standard trendy response that would make sense would be “I will be vindicated once ALL of the information comes out.”  That’s like in the free defense tips 101 handbook for crissakes!