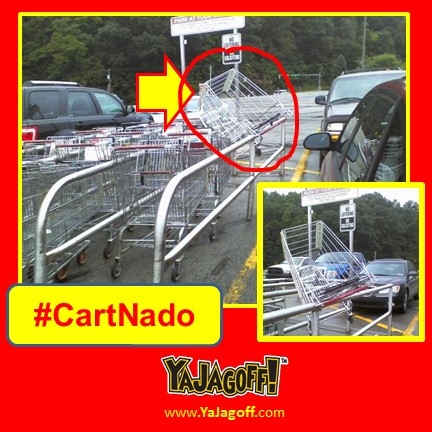 Here are the tweets that accompanied the two pics above.

Made it to the cart corral, but some kid’s gonna knock themselves out. Wheels on the GROUND.

Giant Eagle, Finleyville.  Guess it was better to get a hernia than to get wet.

The tweets seem a little judgmental, don’t ya think?  I mean, how is one to NOT know that a 3-foot wide tornado didn’t pass through this parking lot and topple that thing?  How do we know that there wasn’t a customer attached to it when it was toppled by the 3-foot wide tornado?

Is this a shopping cart that does impressions?  Is it doing a tumbleweed?

Seriously, who in theeeeeeeeeeeeeeee hell has time to pick up a shopping car and lay it on the racks?  At least someone  finally made the effort to get the cart back to the rack vs. giving it a shove into a wall or, even worse, leaving it sit there so that it roams freely around the parking lot, pushed by the wind, looking for a car door to dent.

Just like Stonehenge and those crazy concentric circles in the wheat fields and the Egyptian Pyramids, we can only explain this with an “it must have been done aliens” excuse.

Either way, it presents an idea for a new movie series… You know the fascination with Sharknado… well… this would be CartNado!! BOOM!!!

Don’t know but can someone stop disrespecting shopping carts?  They have feelings too, Ya Jagoffs!

Thanks to @tsickles321 on Twitter for being our Honorary Jagoff Catcher today!