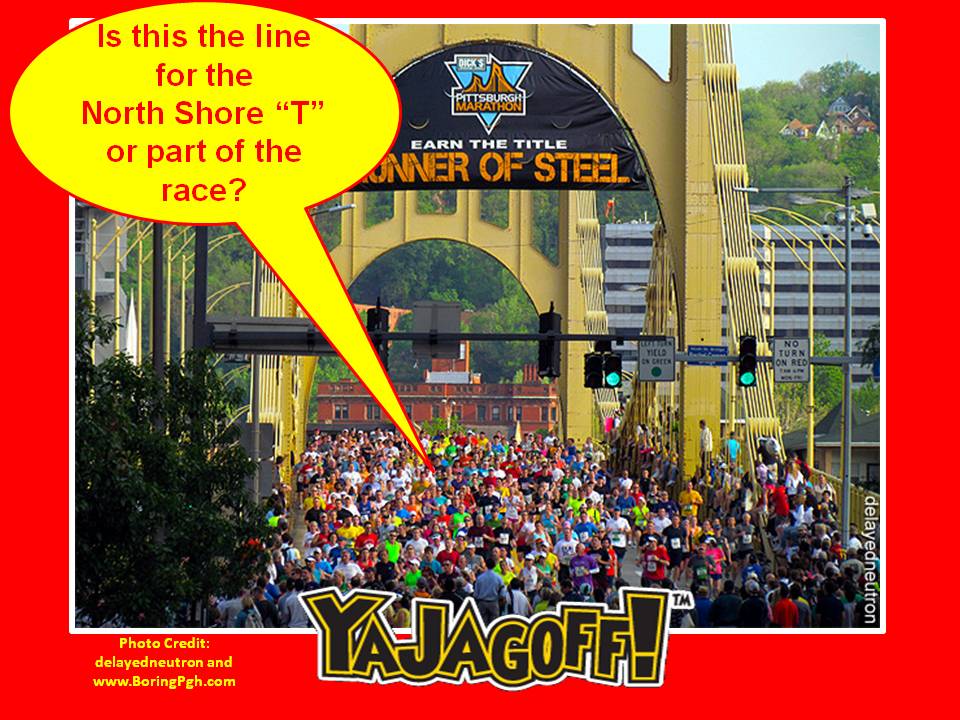 So it looks like the Pittsburgh Marathon was a success in many ways but, it’s not without it’s Jagoffery (yesterday’s post) and who would EVER miss  an opportunity to take a crack at the money-losing-we-gotta-cut-the-service-but-raise-the-rates-because-we’re-about-as-cutting-edge-as-calling-a-bathroom-a-lavatory Port Authority of Allegheny County.

Here’s the note we got from one of the 1/2 Marathon runners:

With such an awesome day, it is hard to be negative BUT you can kiss my a##.

Not only are your schedules for the “T” unreliable, you’d think that you would adjust things knowing that there are 25,000 runners in town and a Pirates game going on.

We ended up waiting 45-minutes at Gateway Center for a five minute ride to the General Robinson Garage all to find the car fully packed with nobody able to board.  After running 13 miles, the last thing I wanted to do was to walk to my car.

Haaaa… nice note Ryan!  Great passion!  Imagine if you could have been THIS mad during your run.  Next race, we suggest hanging a pic of a Port Authority bus or administrator in front of you like an apple on a stick …..we’re thinking that will cut off 5-minutes from your next run time!

Well, you know us.  We approached the folks at the Port Authority about this and, first, they apologized to all of the runners who ran all those miles, then were forced to stand still for 45 + minutes….getting to the point where they thought that their legs had rigor mortise setting in.

Secondly, the Port Authority DID have plan to add more cars to the North Shore “T” line that day.  The problem is that the North Shore “T” track is soooooo short that, adding anymore cars would have only built what would have effectively been a “T Car Expensive Hallway” under the river cuz there wouldn’t have been any room for the cars to move!   It’s kinda like that friend of yours that thinks piling on a whole can of car wax on his hood at one time will make the hood more shiney!!!  (NOPE…just makes it harder to buff!)

Hey Port Authority, seems that your math skills are a little lacking AGAIN!!!

As Sister Aniceta taught us in Catholic School….The number of people coming downtown DIVIDED by number of seats on a bus or subway car seems to be an equation that works for US to solve for X (x=number of transport vehicles needed).

Guessing you didn’t spend the kind of time WE did in Sister Aniceta’s after school detention where she made everyone there do impossible divisions problems long-hand, Ya Jagoffs!!!

Thanks to Ryan Butscher, long time follower, for today’s post and for, once again, being an honorary Jagoff Catcher

Also, this is Nurses Week.  Click HERE for our little video for nurses.

Don’t Forget To Get Your Beach or Sideline Chair!

Tell everyone, “This is MY seat, Ya Jagoff!”