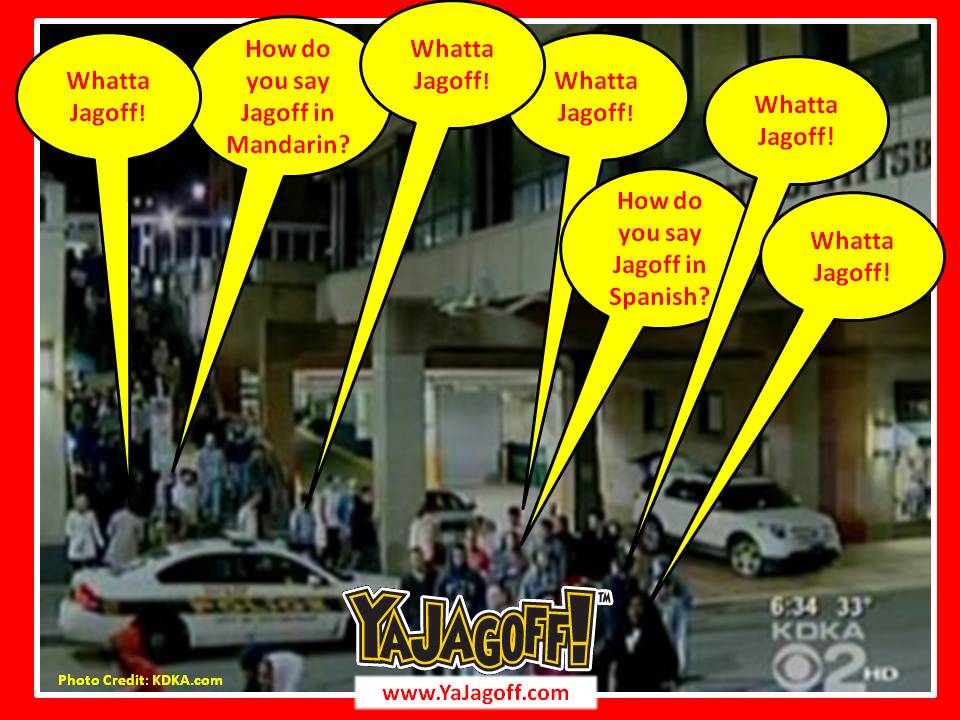 Last night, the University of Pittsburgh outlined new preventive safety procedures for accessing buildings in Oakland.  It’s a result of the multiple “bomb threats” over the past few weeks.  Just like Pittsburgh Pirate losing seasons, they are becoming too ridiculous to count!

Last night’s statement included the following (via the Post Gazette):

Beginning Monday, university personnel will begin to check all buildings before allowing anyone inside. Once a building is cleared, only one entrance will be open in each building and no one will be allowed in without a Pitt photo identification card.

The university also announced that book bags, backpacks and packages will not be allowed in the buildings.

University officials also warned that these measures will create long lines and urged students to arrive earlier than usual for class.

So even MORE inconvenience caused by this/these Jagoffs.  You know the details of the situation so let’s get straight to the punishment that we suggest.

Hey bomb-threaters (or the singular form bomb-threater if it applies) you think this is fun and entertaining.  In the meantime, 1,000’s continue to be inconvenienced at a high level.  The only punishment we can suggest, for when you’re caught, is to be sure that you feel the MISERY that you have caused everyone else so your punishment will start off with 10 straight hours of watching Pirates baseball games of the last 19 years, during which time you will be force fed a Taco Bell taco or a full order of PNC Park nachos with double jalapeno peppers every time the Pirates make an out OR have a run scored on them.

However, prior to that, our favorite gastroenterologist from UPMC, Dr. Lou Stool, will sew your colon shut so that you will be able to sense the kind of pressure your Jagoffery has caused.

In the meantime, since you seem to like the excitement of a big explosion, we will hook you up with the Zambelli fireworks staff.  They will see to it that you are strapped, naked, face-up on the July 4th fireworks barge in between two of the large fireworks launchers.  You will be close enough to enjoy the BLAST noise but ALSO close enough that the launch embers will be able to singe your bear skin, slooooooooowwwwwly, as you enjoy the show.  After the fireworks show, because we are nice and caring, we are going to suggest that you be whisked off to the Mercy Hospital Burn Unit and be put through the extremely painful process of soaking in burn debridement baths for your blast wounds.  The only problem is, there will suddenly be a shortage of any pain or sedation medication.

When you’re done soaking and screaming, you will enjoy being hoisted on to a post that says, “I love Coach Graham,” in front of Pitt’s Cathedral of Learning, where everyone who has been inconvenienced by this will be permitted to stick twigs, Popsicles, salt, Red Devil Hot Sauce or samples of the infamous MRSA infection into your open wounds for a number of hours equal to the lost class time at Pitt due to your actions, Ya Jagoff(s)!

NOTE: Comment below on what additional punishment these (this) Jagoff(s) should get.