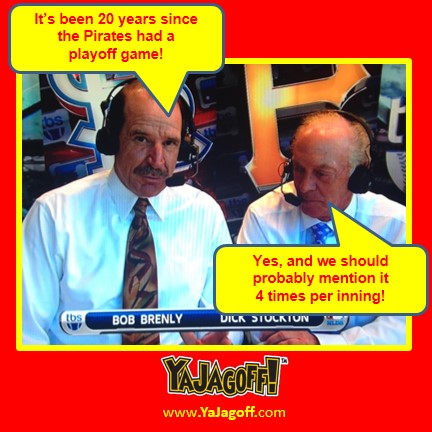 Today’s blog is a Guest Blog post from Twitter follower, Tim Bundy, from Cleveland, who feels our Pittsburgh baseball pain!

This is Tim’s Cat

It is already known that the Pirates are the feel good story of the 2013 baseball season. The previous 20 years of Pirates baseball have been full of futility to say the least and year number 21 a lot of HURDLES have been cleared such as the first winning record and playoff appearance since 1992. They were mentioned ad naseum though the past few weeks.

Back in 1995 I heard all of these things about the Cleveland Indians (yes I am from Cleveland-I know you hate me). But once the playoffs started it would get mentioned for about 2 minutes before each series started and then moved on the the present. Watching Game 3 of the NLDS the first 2 innings JAGOFFS on TV have made mention of “blah blah blah have happened since the last time the Pirates made the playoffs” I am like “OK YOU MADE YOUR POINT!!” JUST BECAUSE ESPN THINKS THE PIRATES ARE HAPPY JUST TO MAKE IT DOESN’T MEAN THE PIRATE FAITHFUL SHARE THAT SEDIMENT!!!

In case you didn’t know you made your point about the streak being over already, YA JAGOFFS!!!!

Thanks again to Tim (@Duds14 on Twitter) for being our Honorary Jagoff Catcher today.  We were thinking the same thing on Twitter last night while watching the Pirates game.