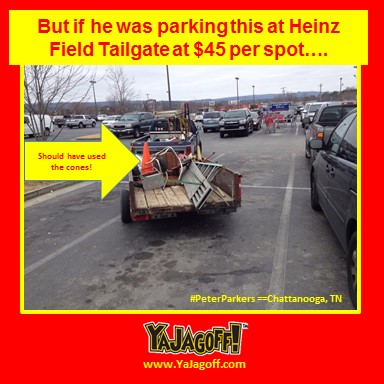 Last night, Pittsburgh Mayor Bill Peduto was on the CBS show, “Undercover Boss.” I’ll get to that in a second.

It would appear that our disciplining about PeterParkers is reaching far.  Here’s one from Chattanooga, Tennessee.

And, the thing is, if he’d of just have been smart enough to be sneaky about putting out those cones, everyone would have thought that he was just doing a crappy job on repainting the parking lot lines!  It looks like there’s some scaffolding  in there or something that allows the driver to do house construction.  I’m thinking the first part of the resume is one’s ability to park and, unless you’re remodeling the Kennywood Noah’s Ark attraction, he ain’t working on nuthin’ for me!

And now a word from the Undercover Boss.  Here’s the scorecard from the show:

Mayor: 1o out of 1o points for representing the City

Marty (the guy on the show who wasn’t fooled by the Mayor’s disguise): 10 out of 1o for reppin’ North Catholic like a champ

Great shots of Pittsburgh on sunny days: 10 out of 10 points given since I lost count as to the actual number

Kleenexes used during the last 20 minutes: 2,301 (I actually switch to a roll of paper towels and the surface area used was equal to that of 2,301 Kleenexes

Me: Zero out of 10 points for knowing how this show goes EVERY DAMNED WEEK and believing that I wouldn’t shed a tear.

And now back to the Chattanooga PeterParker, I guaran-damn-tee you’re the same person that pulls in front of all of the self serve gas pumps during morning rush hour filling your gas bottles and then going inside to pay, get doughnuts , a coffee and some tobacco and lottery tickets, YaJagoff!