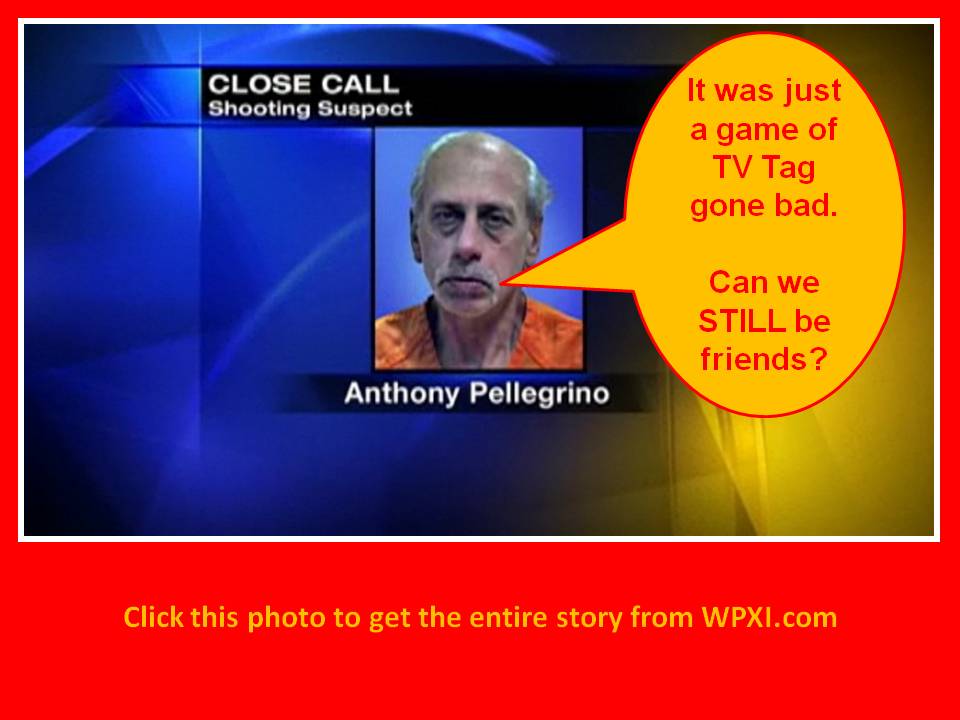 Seems like it’s been FOREVER since we had a NEIGHBOR JAGOFF post or a NEWS PEOPLE JAGOFF!

Anthony Pellegrino had a problem with his neighbor and his neighbor’s dog so he did what ANY neighbor would have done, he hopped in his car and tried to run over his neighbor, Frank Rhone and his dog, while they were out for a walk.  Who needs a magistrate anyway?

But wait!  Pellegrino didn’t just give it one shot.  He seemed to grasp the meaning of PERSISTANCE from watching Evgani Malkin in the Penguins game Sunday afteroon.   After Frank and his dog jumped out of the way, Pellegrino threw the car in reverse and headed for Frank and the dog again!!

Frank is, of course OUTRAGED, and does what any NORMAL person would do– he whips out a gun and starts firing it wildly at Pellegrino’s car!  The problem is, Frank’s not too good of a shot while laying on his back in a yard, holding onto his dog trying to avoid being run over by a wild car…..one of his bullets hits a house and, as you can see by the WPXI story, “narrowly missing a woman inside.”

At some point, Pellegrino gives up to the police thus avoiding this calamity from getting any worse.  We could just see this ending up as something out of a  Looney Tunes scene where the “narrowly missed lady” comes out of her house with a shot gun, misses her shot, causing a bucket of water to fall off of a window ledge, dumping the water on to some outside Christmas lights, thusly causing an electrical short that causes one of the street’s transformers to explode on a telephone pole, which scares ANOTHER neighbor’s cat who SCREECHES and JUMPS and freaks out Frank’s dog, who then tries to CHASE the cat and pulls on Frank’s arm soooooo hard that his arm pulls out of its socket, thusly causing Frank to CRAP his pants from the pain which, in turn, causes Frank’s dog to CRAP in the yard and ……. GUESS WHAT????  Frank has NO Pooper Scooper  baggie on him to clean up after his own dog and the situation finally culminates at the point why Mr. Pellegrino was INITIALLY sooooooo mad.  (Now who HASN’T  been that mad at a neighbor that doesn’t clean up after their dog?)

OK.. all of that’s a lie.. it turns out that Frank and Anthony have had a life-long game of “TV-Tag” going on in the neighborhood.  Last night, Anthony was chasing Frank.  Frank ducked down to avoid being tagged by Anthony and yelled “Dukes of Hazard!”  At that point, Anthony took him seriously and went all “Boss Hogg” on Frank!

Ok..tht’s a lie too!  But what WOULD explain to neighbors acting like this other than them being .. well.. wait for it….

Frank and Anthony, you guys are the EPITOME of “there goes the neighborhood!”  We recommend you guys sign up for a Seniors Hockey League at a local ice rink. Then, you guys can fight once a week— with no chance of going to jail—you only have to sit in a penalty box for 10 minutes each time, Ya Jagoffs!

WE LOVE AN AUDIENCE!