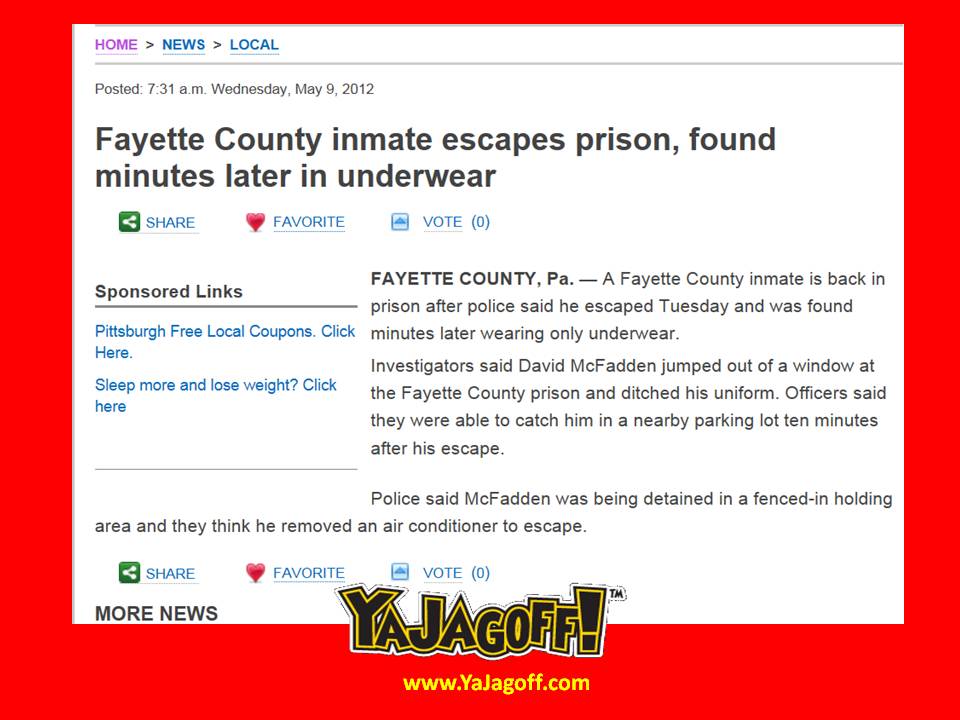 This is gonna be an easy one.  If you like to read our blog while you’re doing your morning “sit on the toilet” you may need some more reading material today.

The article above is from the WPXI website.  It basically says:

David McFadden jumped out of a window at the Fayette County prison and ditched his uniform.  He was caught 10 minutes later by police.

Was it super-fantastic detective work that helped to catch the guy?  NOPE!   It was lack of planning on McFadden’s party.  Ya see, he thought of step one.. shedding his jail jump suit the moment he got out so that nobody recognized him as a jail-bird.  But Mr. McFadden DID NOT take step 2 into account and properly plan for it….he had no other clothes which, in turn, easily helped the police figure out which one HE was in a crowd…the guy only in underwear!!!!!!!!!!!!!  Thank God he WORE underwear!  Given this is Fayette County, he might have simply blended in, if he would have been naked!

God!  Don’t ya just wonder if, people like David,  are soooooo stupid that they have to set an alarm on their Timex, reminding them to BREATHE every 4 seconds??

Hey Davey, when you get back to your jail cell, here’s another hint when you go to CHANGE your underwear, here’s how to not be confused… remember, BROWN stains in the back and YELLOW stains in the front!  Now get back to jail before you hurt yourself out here, Ya Jagoff!