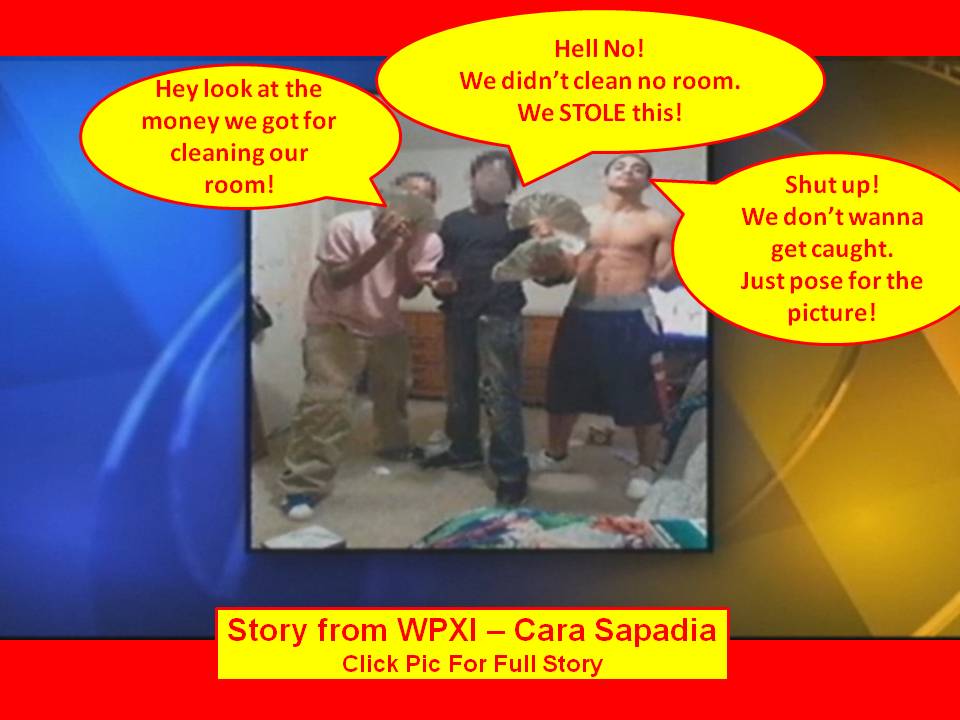 If you haven’t heard about this story, click the photo above for WPXI’s Cara Sapida’s version.  It’s great to watch her tell the story and try and keep a straight face!

This is going to be a quick story because it’s real easy.  These guys stole $8,000 from a local convenience store – in their own neighborhood where people know them.  After that, they decided to celebrate and take pictures of themselves with the loot and posted them on Facebook.

Whaddaya think?  Will they get infamous Pittsburgh defense lawyer Jim Ecker to defend them by saying these boys are typically really good kids, outstanding citizens, who  were just playing a game of Pittsburgh Monopoly at home so that they could be off the streets and out of trouble and that it’s just a COINCIDENCE that they posted this picture of their Monopoly winnings the day after an unfortunate “unknown burglar” hit the Elliot’s Town Market.

Or wait!  It’s December, maybe he’ll argue “How do we know that they didn’t make this money by shoveling snow from neighborhood driveways and sidewalks?”  (Oops, it’s 55 degrees)

So what is left to be said?  As it turns out the juveniles involved do not have a criminal history according to the WPXI story.  However, we looked into their school history and found that they have been troubled geniuses for some time:

In grade school, the one kid stole a basket ball from the playground at lunch time, didn’t  know what to do with it so he put it under the front of his t-shirt and told everyone he had gas and was feeling bloated.

In 2007, they wanted to all get out of school early so they all brought notes in that said, “_____ needs to get out early.  Signed, Horshak’s Mom.” (That will be the ONLY “Welcome Back Kotter” reference we ever make)

In 2010, they all skipped school, saying they were sick but, when they got hungry that day, they showed up at the school for lunch.

In the Spring of 2011, they took a test in school and cheated on it.  When they all got A’s, the teacher asked them for a copy of their notes.  They all submitted photocopies of the back of their hands where they still had their cheat notes written.

Earlier this year, they had broken into a school pop vending machine and stole all of the cans of pop.  The only reason they got caught was, they were too lazy to carry the stolen pop anywhere so they  set up a table NEXT to the broken-into pop machine and tried to sell those cans of pop on their own!

Boys, the take-away-lesson here is, it’s great to be the most popular people on Facebook, just not with the cops, Ya Jagoffs!

Have a GREAT HOLIDAY!!

NOTE:  The best news of all is that a family member turned them in.  Kudos to them!!  They actually should get a reward.