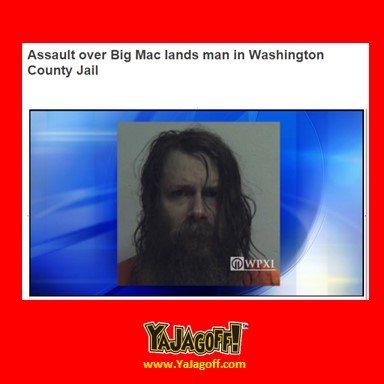 Let’s get this one over quickly.. since its about fast food and fast food gives most people intestinal discomfort as it moves “quickly” through the intestinal tract.

Police said Thomas Veres, 47, became irate when he returned home Wednesday to find that  another man, 58, had eaten three Big Macs without saving one for him.

“Irate” in the WPXI story is defined as beating the other guy up and ransacking his home.

If this was a story where the other guy had eaten that one, little, crunchy, very last Micky D’s french fry chip thingy at the bottom of the bag, I could see the anger.  No jury of french fry eating peers would ever convict you.  Just be sure they are not Burger King french fry eaters.. because those people have zero taste in french fry choices and would not be able to empathize.

Thomas, you thought that you should punish him for eating 3 Big Macs?  Don’t you think that the 2-day long “natural” colonoscopy that would result from eating 3 Big Macs would be more than enough of a beating or punishment?  I mean, if you’d have just force-fed him some jalapeno, or better yet, ghost peppers, that would have been as close to legal capital punishment as you could get once his body started “cleansing” as a result of downing 3 Big Macs for gawd sakes!

Now YOUR going to jail and its YOUR butt that’s gonna hurt, Ya Jagoff!