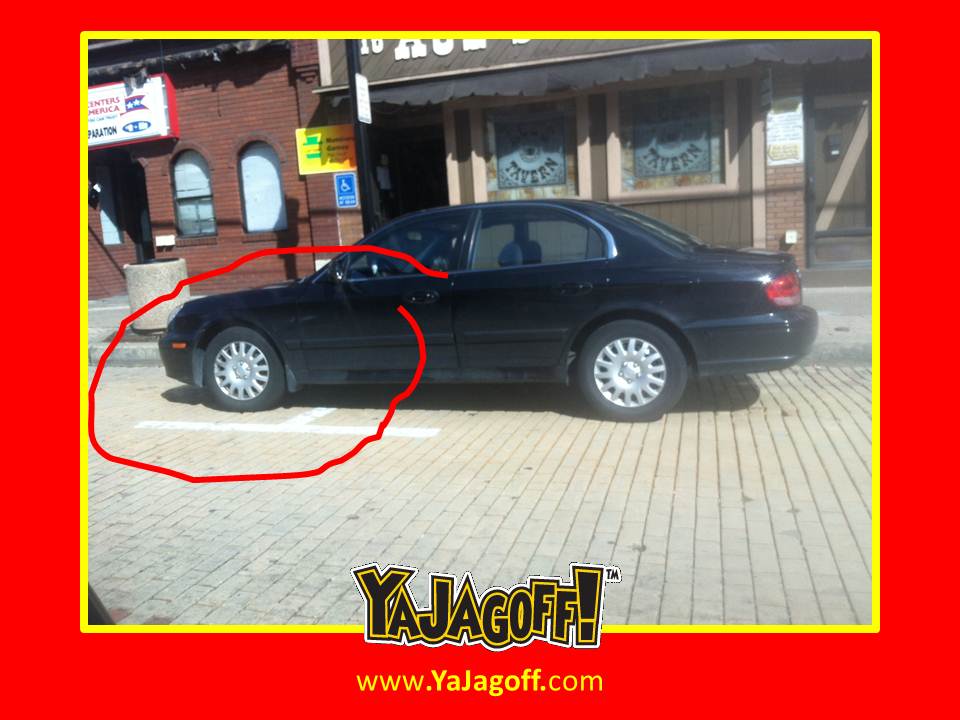 We’ve all seen this #PeterParker… you know him don’t you?
Allow us to set the seen. It’s late at night and you’re driving past Primanti’s or your favorite local bar and you see this car swerve into your lane. He’s probably got his windshield wipers ON and possibly no headlights?  He’s that guy that you want to stay away from but won’t dare get close enough to pass. Maybe an arm out the window with his hand riding up and down in the wind like an hand-plane.   Yeah that’s the one!

In this day and age of instant gratification why would this guy want to WAIT ’til he’s back out on the road to be a.. well.. YOU know? No way! He’d much rather park in one-and-a-half spots in front of Ace’s Tavern on busy Broadway Avenue in Stowe Township. How desperate can someone be for there afternoon boilermaker?!

It’s the old chocolate OR white birthday cake dilemma!!! BOTH of these spots looked soooooo good!  How could he he resist having little piece of both?

You’re probably asking yourself the same question we were when we saw this picture….did he at least feed both meters?! The answer is no!

But our SJU (Special Jagoff Unit) investigators got right on this.  They went inside the bar and found out that the guy ran in side the bar and went directly to the MEN’s room.  They found him straddling two urinals and, basically, peeing all over the floor and his shoes!!

Hey Aces’ Ace, we’re guessing you have a GREAT career in School Board politics… you’re quite an ACE at straddling EVERYTHING.  Ya might want to consider seeing an optometrist for one of those eye-doctor-better-THIS-way-or-better-THIS-way-I-don’t-know-you’re-switching-too-fast eye tests, Ya Jagoff!!