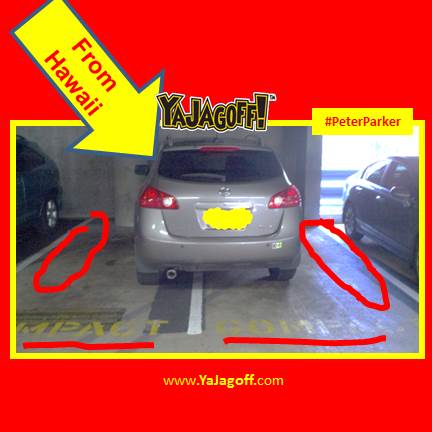 Peter Piper Picked a Peck of “Peter Parkers” for today.  And you don’t have to sit them on your window sill with your TA-mate-AHS to ripen through the night!!   They are ripe and ready.  The inbox, Twitter feed, Facebook and feeds have been full of  ’em!  So let’s get at it cuz, as my dad would say, “Christmas is coming!”

The compact car occupying two Compact Car Spaces comes all the way from Hawaii!!  Clearly this driver has special awareness challenges.  We heard this person sometimes is caught standing half in and half outside the shower at home.  And all of this talk about COMPACTS, reminds us of a cool COMPACT joke..

Our SJU, Special Jagoff Unit, was on this and found out that this was an airplane pilot’s car.  He’s used to running the nose up the center line.  We also found out that he was assisted with parking his car here by a guy in an orange vest, headphones and two real-long orange flashlights.  Supposedly one of those cool little baggage-hauling vehicles came out too to help load the groceries.

But WAIT….we got us a curb-hugger in Squirrel Hill.  At first we thought it was sad that someone didn’t even feel a huge bump as they parked. 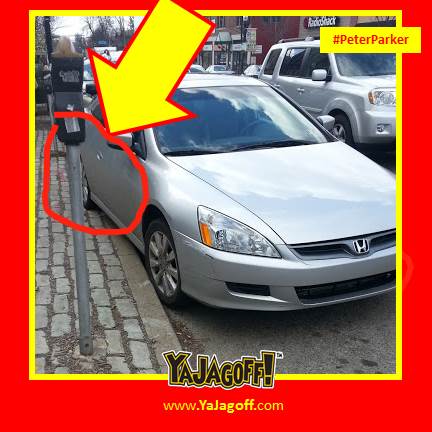 But then our JSGU investigated this one too!  It turns out that this car is a stick shift with a bad battery and alternator.  So it needs to get a run down a slope and popped into gear to get started.   Rolling off a curb is a good start.  Therefore, after parking and turning the ignition off, the owner apparently gets out of his car, walks around the back and picks the back of the car up, with one hand, and PURPOSELY places the car on to the curb.  (For Realz! ) 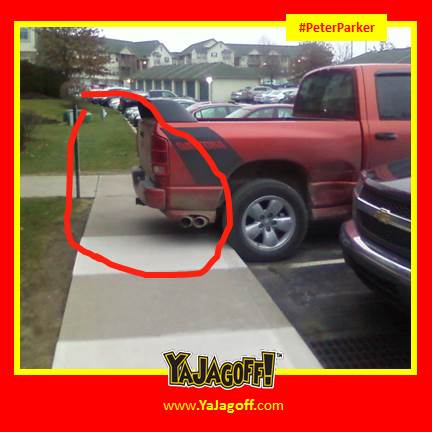 We didn’t even have to write anything for this one.  See the email that came with it:

This woman always parks in some dumb way in our complex. Judging by the fact that the entire passenger side of the truck is damaged, I think it is safe to assume she doesn’t know how to drive a truck. If you cannot drive a truck, do not buy a truck! That’s what I always say. Apparently she cannot be bothered to line up with the truck next to her, so people are forced to walk in the mud or brush against her dirty truck.

Oh, and here’s the other thing… the spot on the other side is the Handicap parking spot. Good luck getting through here, disabled senior citizens.