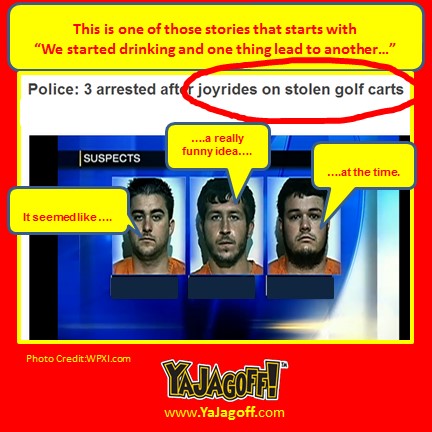 Well, you know what it’s like, right?  You’re hanging with your buddies. A few drinks happen. Ya start to argue about the Steelers’ chances in the 2015 Super Bowl, have heated discussions about the Pens new coach and how argue how one if you’s an #@$hole because he thinks Pedro Alvarez has to go.  Before that conversation turns into a fight, you change the conversation with the words:

Ya know what we should do?

And then everything that follows is  usually as series of bad choices but, heck, what have you got to lose BECAUSE YOU’RE IN THE 11TH GRADE!!!!

But these guys, mid-20’s guys thought it was a good idea to ALLEGEDLY have a few drinks and take some golf carts for a ride at 10:30-ish at night.  At some point, they get out on the road, crash and…..the best part…. a neighborhood guy chases them down by RUNNING!!! Haaaaaaa… haaaaaa….(pee trickle)…..snort… haaaaa.

This turns out to be one of those embarrassing stories that you and your buddies make a pact that you’ll NEVER tell anyone what happened EXCEPT for the fact that……the older neighbor chased your 24-year old ARSE down and called the police and then somehow it got on the news.

Boys, since ya seem to like drinking and driving golf carts (which is what most people do despite the fact that they call it GOLFING) here’s a joke you can tell the boys during your hot-dog turn the next time you’re out.

Q: Why does a golfer where two pair of pants?

What’s that you say?  That joke is childish?

To that I say, no more childish than 3 mid-20 dudes who let a few beers ALLEGEDLY convince them that joy-riding in golf carts 10:30 at night is good idea, Ya Jagoffs!