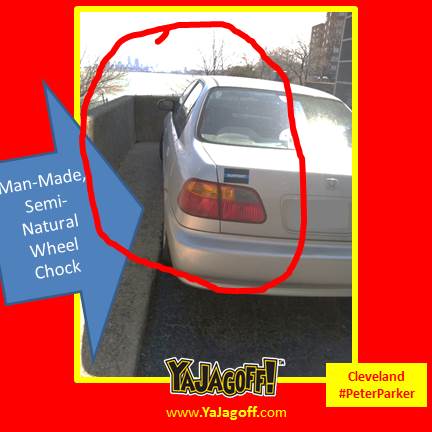 OK….before you get tooooo crazy with the anti-Cleveland comments….. yes, this “Peter Parker” pic was taken in Cleveland.  BUT… it was also SUBMITTED by a Cleveland-er that, clearly, has their heart in Pittsburgh!

That said, let’s get at it.

As you can see by our Jay Caufield-approved Jagoff-estrator markings, this person pulled into this spot and some how thought it was cool to pretend they were a military Humvee by hopping the curb.  Haaaaa….this picture makes you wonder if the driver even questioned what might have caused the huge “CLUNK” noise when they pulled into this spot!

But then, as usual, we got to thinking…giving even CLEVELAND-ites the benefit of the doubt…. maybe this was done on purpose.  Some  potential reasons for parking like this on purpose?

2)  This car has a bad emergency break and the driver thought that they needed a wheel chock so that their car wouldn’t roll away.  (The BAD news is it’s on the wrong end of the car!

3)  This driver wanted to change their own oil BUT didn’t have a jack at home so they found this a great place to work under the car with a nice view of Downtown Cleveland.

4)  This person realized how much better Pittsburgh is than Cleveland and they asked a Pittsburgh couple that was visiting the Rock n Roll Hall of Fame to kidnap them and bring them across the State Line.  They parked the car this way to make it look like a REAL crime.

Not sure what the real story is and had absolutely no interest in driving to Cleveland to investigate unless someone was going to buy me lunch at the Winking Lizard restaurant.

We still don’t understand how this driver didn’t bite their tongue or shatter teeth when the jumped that curb.. and then had not a single inkling to let the car roll back DOWN off of the curb before putting into PARK!    What we DO know about, jumping the curb is:  the BUMP in the front of the car was caused by the JERK behind the wheel, Ya Jagoff!!

Thanks to Ron R from Cleveland for the pic and glad you felt comfortable deputized as one of our Outta-Town Honorary Jagoff Catchers!

ALSO, special thanks all those that came out to the Latitude 40 Comedy Show this past weekend!!! Yinz guys are awesome! 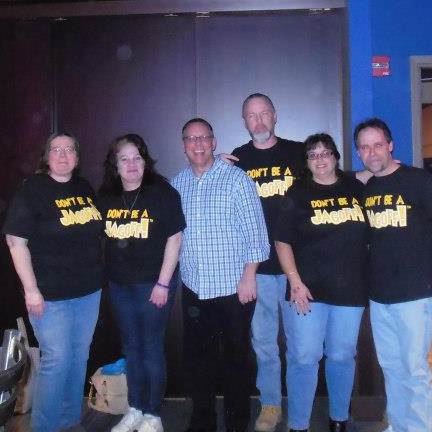 Don’t Forget To Order Your  Own T-shirt