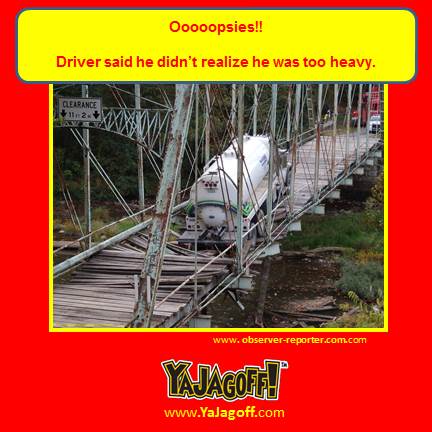 If ya read the story about this fracking water tanker on this bridge in the Observer-Reporter, you get the story from the driver that he didn’t see any of the 3 or 4 “4 Ton Limit” signs as he approached the bridge.

Me, on the other hand, takes one look at that bridge and says, if I was on a bicycle I probably would think I was too heavy to cross that bridge.  Especially if I had eaten just before crossing or hadn’t pee’d for the last hour.

But good ol’ boy, Jason Wayne Strawderman, took a look at the bridge as he was sitting on top of a truck of water with a 4,200 gallon max laod, says, “Well, we gotta get across SOMEHOW!”  And he ends up creating a scene from what looks like a new Indiana Jones Runs From Pittsburgh to Morgantown movie.