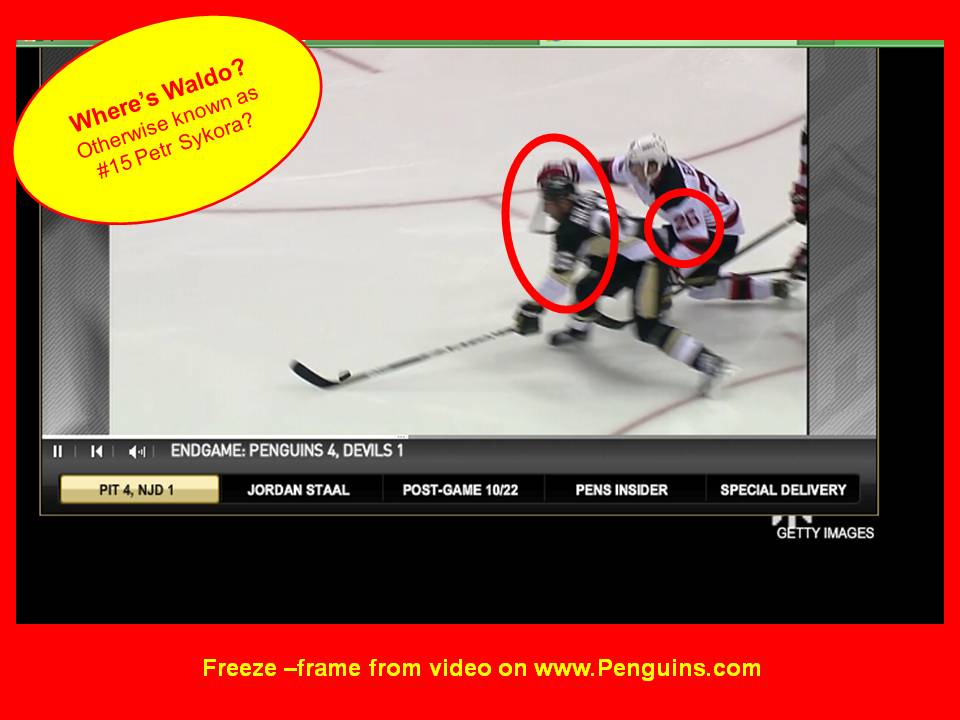 Haaa.. you say, “Who are Kevin Pollock and Francois St. Laurent, Ya Jagoff?”

These two blind-mice-and-men are the NHL referees that worked the Penguins vs. Devils game Saturday night.  In the 3rd period, they totally missed the fact that the guy they called for a penalty WASN’T the guy that went to the penalty box to serve the penalty which left the actual culprit on the ice to score a goal!

One of the better versions of the story is here:  FireAndIce Blog.

Basically, Patrick Elias of the Devils ( #26 in the picture above) high sticks Steve Sullivan of the Penguins in the face.  He gets a 4-minute penalty for drawing blood.  They even call his name and number over the P.A. system.  Then, ex-Penguin-now-New-Jersey-Devil, Petr Sykora, #15, quietly slides himself into the penalty box and shuts the door.  The Penguins complain that the WRONG PLAYER is in the penalty box but the referees and linesman continue the game.  #26, Patrick Elias goes on to score a short-handed goal to tie the game.  A quote from the FireAndIce article:

Right wing Petr Sykora admitted that he intentionally pulled a fast one on the referees by going to the penalty box to serve a high-sticking double minor that Patrick Elias actually committed 37 seconds into the third period of the Devils’ 4-1 loss in Pittsburgh tonight.

Petr, we’ve been fans since ya dropped the “F-Bomb” on national tv when you were skating around with the cup.  Today, we wish that Roger Goodell was the NHL Commissioner because we’re relatively sure that he would give you some HUUUUUGE fine for cheating, a random amount of which would be determined by the numbers on his last weeks’ losing PowerBall tickets.  (Of course if ol’ Roger Go-ta-hell was the NHL Commissioner LAST YEAR, Matt Cooke’s house and cars would probably have been repossessed!)

And to Kevin and Francois, the DISTINGUISHED referees, we realize there’s a lot to watch during ANY NHL game, but keeping track of who gets goals and penalties is kind of important.  Maybe the NHL should create an I’m-a-Total-Idiot-Referee APP to help.

We HATE armchair referees but, here’s a little tip from OUR armchair on how to keep track of the craziness during those REALLY FAST hockey games (just in case you hadn’t yet notice in your 20+ years of officiating)—all of the NHL players have UNIQUE NUMBER “thingies” and NAMES on their shirts.  Check  it out the next game, YA JAGOFFS!!!

Make sure you check out “Who’s Wearing A Don’t Be A Jagoff Shirt” Page HERE!