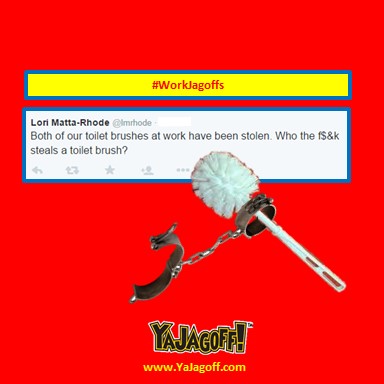 Ok…we have all stolen, sometimes known as “borrowed,” things from work, i.e. paper for the home printer as we justify how much work we do at home, staples because we figure, “what does one row of staples mean to this place,” or pens and pencils …justified by the fact that “this place doesn’t pay me what I’m worth so they owe me!”

But, toilet brushes?  The first question is WHY?  The next question is, where would you hide it… your briefcase, backpack or bag of stanky gym clothes?

Maybe there was that one day Jim in accounting had his comb-over messed up by a windy walk from the parking lot to the office so, he panicked, used the toilet brush, it dripped water on his forehead, he got grossed out and tossed it out a window with some kind of, “You’ll never drip on ME again,” kind of vengeance.

Or, maybe Amy from HR ran late getting into work and realized that her hair looked nappy so, she used it… liked the sheen that it put on her hair and stuffed it in her bag?

At this point, I think you just hope that you don’t go to a picnic at some employee’s house and, you see him/her basting the ribs on the grill, with oodles of home-made BBQ sauce aaaaaaaaaand….yeah..you got it….and the applicator is a toilet brush!!!

WHOA… worse than finding a cat hair in the work “cat lady’s” poppy seed cake and then she giggles and says, ‘oh sometimes Sheena licks the bowl when I’m making cakes! (giggle..giggle)”

So…stop stealing the work toilet brushes… they’re a buc at the dollar store for crisssakes, YaJagoffs!

Thanks to @lmrhode on Twitter for being our Honorary Work Jagoff Catcher.

Comment below on the best thing you’ve “borrowed” from work.  All comments will be entered into a drawing for the pair of Horror Realm Con tickets.

Winners name will be posted on tomorrow’s (7/24) blog post.