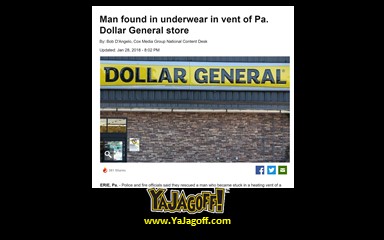 Underwear thief?? Well… not like STEALING undies but like trying to steal stuff while he IN his undies!

See full story on WPXI.com if ya want.  But, the ALLEGED thief, 20 year old Michael Rodriguez, supposedly tried to break into the store by the slithering-through-a-vent-pipe-mission-impossible method…but in his undies! Hopefully they weren’t his overly-used-have-holes-all-in-them-most-comfortable pair of undies.

As luck would have it…he got stuck.

So.. when he was set free.. well.. relatively speaking.. he was of course still in his undies! No reports on whether he received a wedgie OR if the fear of being stuck in a vent pipe caused any kind of skidders!

Big Mike…what in theeeee hell is inside of a Dollar Store that would make ya get into your skivvies and go down a vent pipe??  I mean.. I crave 24-month old chocolate candy but..bruh!!!  Pull yourself together!

Just a quick criminal defense tip… you’ve heard of the “naked” underwear cowboy in Times Square?  Well… YOU, my man, are Western Pa’s “naked HVAC Tech!” Seriously.. that will fly! Screw getting a lawyer! You have US behind ya. Just remember to put on pants before the hearing!

By the way, we heard ya got a few burns from being stuck in the heating vent pipe.  Guessing that means that ya may have had to go to the hospital Emergency Department, huh?

Sure hoping ya took my mother’s warning about always putting on clean underwear before ya go out just in case you go to the hospital… Ya Jagoff!