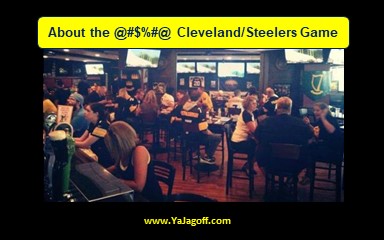 Today’s blog post by Rachael Rennebeck, co-writer of the blog and co-host of the YaJagoff Podcast who had a chance to EXPERIENCE the Steelers game at a local establishment.

It is bad enough when the living room windows are ever-so-slightly cracked and the neighbors catch an expletive, and I am certainly not talking jagoff! But it is craaaaay to the zeeee when watching a game like yesterday’s Steelers vs. Browns game and you experience these fans:

After hearing all of this craaaaazeeeee background noise, we tie.  We tie the Cleveland Browns. The Pittsburgh Steelers fumbled, miss-kicked and outright played sloppy.  But, it is game one and it wasn’t a loss.  Plus, I have to stop or else I become one of the guys on the day after a loss list.  Ya know, the mistake explainer, the breakdowner, or the grass is always greener guy.

Next game, just stay home and eat some cheese whiz and yell at the TV instead of getting on the game day guy list, ya jagoffs!