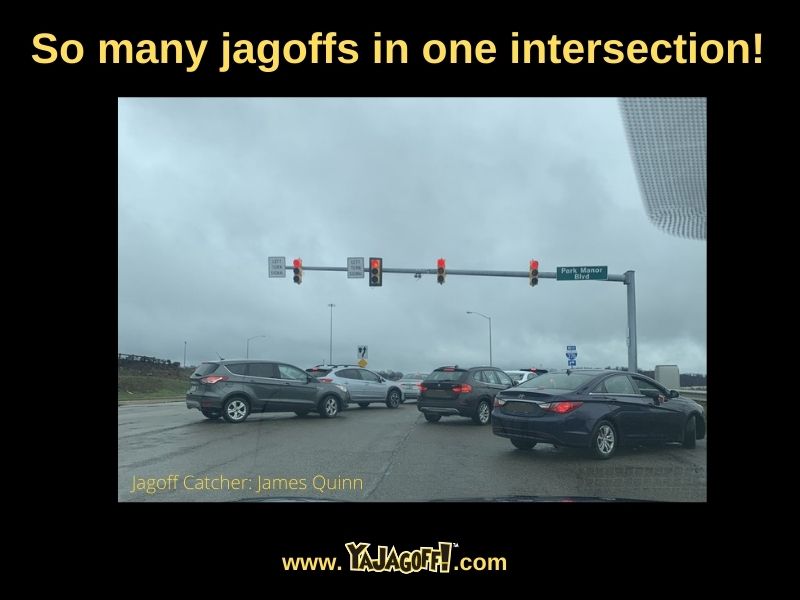 As you know this blog was created to point out when people are being IG’nernt (my grandmother’s word for ignorant) to others.  And, nothing exhibits the phrase “I don’t give two sh#ts about anyone other than myself” (my grandfather’s words selfish IG’nernt people) better than, drivers who jump through yellow lights, make their own lanes, stack up cars worse than a dozen 9-year olds on the Kennywood Bumper Cars, and block the oncoming traffic because they JUST HAVE to get to where they are going before YOU DO!

Right… because sitting through the next red light for yet another 2.5 minutes makes a difference on whether or not you get the last cart a CostCo or the last set of undies on sale at Target!

As we always, say…. we could reduce the national debt if we cited every driver, that did this, $25.  Just plant us right there at the corner.  We will write citations until my hand has cramps in it like I used to get when I would write dissertations in Sister Anecita’s after school detentions sessions.

So just to review the rules of the road.. when the light is yellow, it is not time to jut your car forward … sit where you are and take that extra time to check your emails or your Facebook status on your smart phone, Ya Jagoffs!

Thanks to @RealJamesQuinn from Twitter for being today’s Honorary Jagoff Catcher.