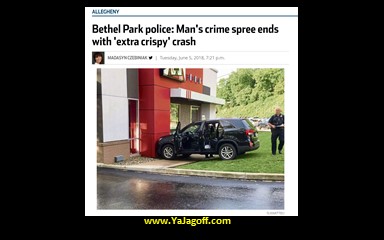 Well.. the word ALLEGEDLY should be in that title I suppose.

Here’s the quick summary.. A guy… (not one of the latest attempts to create another one-off creepy Colonel Sanders).. in stolen WalMart clothes, ran a stolen car, into a not-stolen KFC building. The other allegedly thing is that he was allegedly DUI.. not sure if alcohol was stolen.  (See full story on TribLive)

So we have the chicken-and-the-egg question!

(See how I used the ol’ CHICKEN word there for this KFC post? Dude…I’m more crafty than a 70-year old woman holding 8 glue guns in the middle of a Pat Catan’s store!)

Side note: Here is what the Bethel Park police wrote about this on their Facebook page about the suspect’s blood test, “will be analyzed to see what special blend of herbs and spices may have been a factor in the crash.”

Big guy… good luck on court day! Not sure what to tell ya from a defense standpoint re: the alleged DUI and stolen clothes.. BUT.. all is not lost!  Those KFC popcorn chicken thingies are like crack! Soooooooooo…. I’d say go in there and claim addiction to KFC popcorn chicken.. might help with the WalMart sitch too because who in theeeee hell steals WalMart clothes, Ya Jagoff?