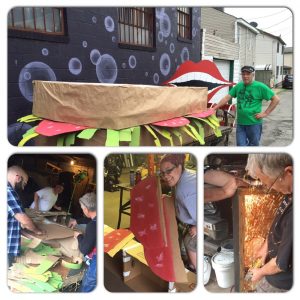 Well, this year’s YaJagoff.com entry into the “Anything That Floats Race” was intended to be a floating Primanti Brothers Sandwich, on twitter known as #FloatingPrimanti.  Under the guidance of Chief Yinzerneer Dave Calfo (as named by Steve Fernald), we built a vessel that looks great!  We have no idea if it was going to float so the entire team was damned glad that we didn’t have to go into the fast, sewage-overflow river.

As of today, I feel fairly certain that you will see the debut of the #FloatingPrimanti within the next week…possibly on a day when the Pirates play an afternoon game (hint..hint).

It’s gonna be a glorious day when this thing hits the water…. mainly because salvage artist and Chief Yinzerneer, Dave Calfo, will get his garage space back!

So… stay tuned….we will be hitting the water complete with our french fry hats!

Second Hint: after church this Sunday, don’t head to Denny’s or Eat n Park.. head to the North Shore!!!!

By the way, thanks to KDKA-TV’s David Highfield for doing a story about the #FloatingPrimanti and the Regatta situation.  See it here.

If we would have won the “Anything That Floats Race,” the prize money was headed for the  Pittsburgh Emergency Medicine Foundation but you can feel free to find out more about the organization or donate by going here.