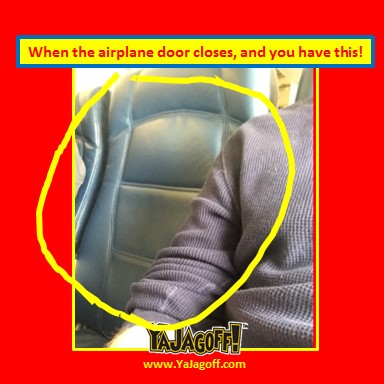 Traveling on a commercial airline is no fun anymore.  You have to play the randomly-assigned-and-configured airline fee game, put up with people talking on their phones until the door is sealed shut and the planes seemed to always be packed.

I’ve done everything I can think of to discourage people from sitting down next to me on planes including pretending that I am a defense attorney and having gory crime scene photos up on my tablet screen during seating, shooting saltwater up my nose before a board (so that it looks like I have a runny nose when I’m at my seat) while carrying a box of extra-moisturized nose tissues and eating candy pills out of an industrial sized bottle of GasX so that it looks like I’m lactose intolerant and just chugged 10-gallons of whole milk.

But most of the time, these efforts are done in vain because someone always needs to have a seat.

But this day.. this very exciting day…me and the guy in the aisle seat in my row, felt like we hit the lottery.

We went through the maneuvers of awkwardly  glaring, staring, giving threatening-eyes and bedroom-eye looks to everyone boarding the plane looking for their seat. Then….suddenly… it happened.  The door shut.  The announcements started and me and the guy to my right looked at each other like to teenage brothers staring at a full, open bottle of cold beer that dad conveniently left on the kitchen table  as he walked downstairs to go cut the grass for the next hour… “Did that REALLY just happen?”

Boom! The announcements started and the plane started to rev and everyone was seated.  This was the only seat not taken.  We had won the airplane musical chairs championship.. room to expand and relax on a 2-hour flight home!

Me and the guy kind of commented about it but, we were like those people who win the lottery and wait 5 months to claim it….we did not want to jinx this so we just went on about our business…quietly “telapathy-ing” to everyone else on the plane..”Look it us with some elbow room, Ya Jagoffs!”