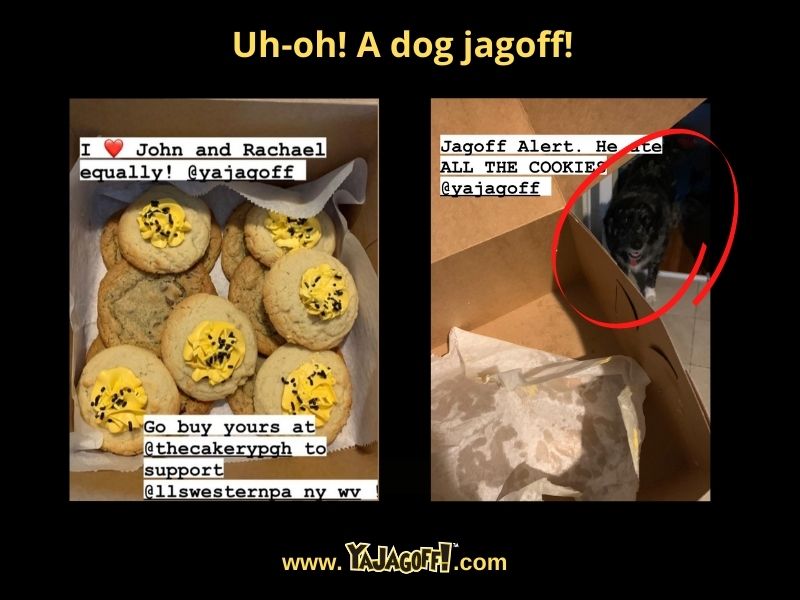 Over the last couple of days, leading up to Fat Tuesday, Rachael and John were engaged in a cookie war to raise money for the Leukemia and Lymphoma Society of Western Pa.  It was simple: Show up at The Cakery in West View and choose Team Rachael, an iced and jimmied thumbprint or Team John, a standard chocolate chip.  The Cakery would then donate a portion of the sales on behalf of Gianna Reed who is raising money to become the LLS Student of the Year.

The cool part is, Julie H. showed up and purchased an equal number of choco chip and thumbprint. Soooo CYUTE!

But then….Julie took the box of cookies home, left them unprotected and BOOM… the DOG ATE ALL OF THEM!  And look how, “It wasn’t me!” he looks in the pic!!  Haaa..

You know the ol’ routine when you would lose your homework, or paid an invoice late, etc…. you would say, THE DOG ATE IT! At that point, the dog is your excuse and best friend so you say, “Good Dawgie!” But, when the dog REALLY does eat something… like all of the cookies that are done being sold today because of Lent.. that’s when the dog becomes a bad dawgie and ya yell….”You ate all of the cookies… Ya Jagoff!”

NOTE: Thanks again to all that purchased cookies. Not sure who won the contest yet!