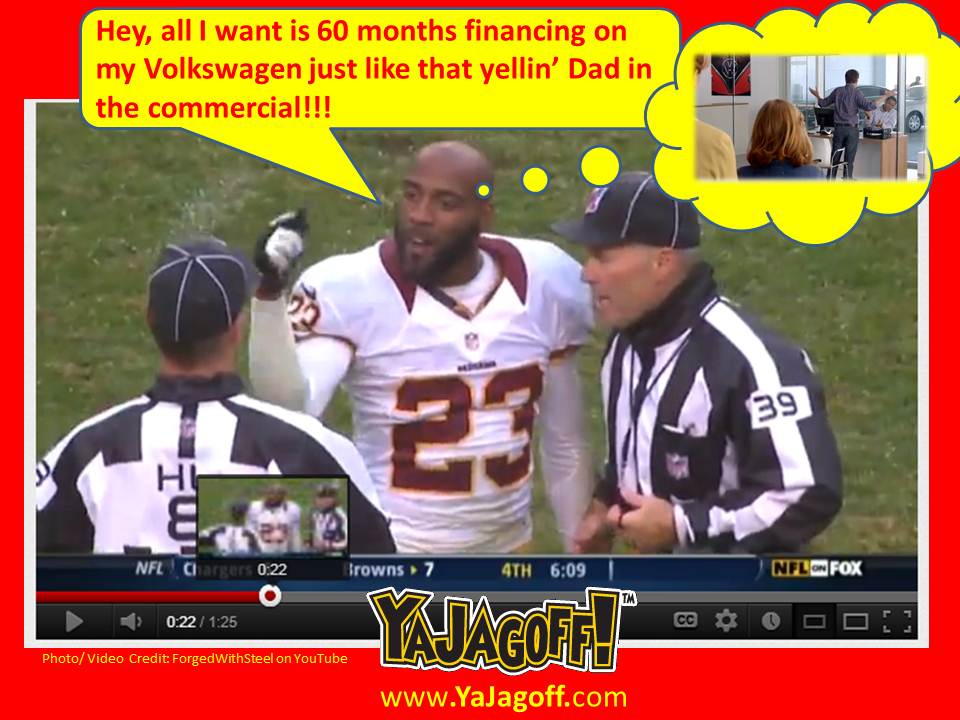 Always awesome to write a post-Steelers-win blog.  Especially when the other team is the topic.  Today, it’s Washington Redskins’ Corner Back DeAngelo Hall.

If you didn’t see the game, here’s a quick video replay of what happened with less than 4-minutes to play in the game.. meaning, there had been about 56 PRIOR minutes of Hall chasing, and not being able to catch, Steeler receivers….

He was flagged and ejected and took the walk of shame to the locker room a few minutes earlier than his teammates.  It is not confirmed if they all yelled to him to get the hot water started in the locker room showers!

So this is no big deal unless you realize that Hall has been pretty much a loud-mouth-and-off-the-field-nuisance to his teams/teammates throughout his NFL career…taunting about how he made a $7 million signing bonus and $1 million in base salary—for playing eight games at Oakland when they released him for not being able to understand their defense and getting  beat on nearly every play, having his house seized for not paying taxes, etc, etc, blah.. blah.. blah…

So after yesterday’s game, DeAngelo boldy told reporters that he was going to the NFL offices in New York City first thing Monday morning to make a stink about the call.  Reporters then reminded him that NFL Comish, Roger Go-ta-hell (as WE call him), had buttoned up the office this coming week because of the inbound Hurricane Sandy.

Hey “Big D,” we didn’t confer this with the ever-popular-defender-of-tough-guys, Attorney Jim Ecker, but we suggest the “Volkswagon commercial defense” for sure!!!  Just go tell King Roger that you were still thinking that the replacement refs were still in town and, you thought you overheard that, the official that you were yelling at, owned a dealership and could get you an AWESOME deal like the dad talking baseball in the commercial.  (Watch it here if ya want.)  Because we’re nice guys, you do NOT have to pay for our GENIUS-ness today!!

In the meantime “Big D,” it might be time for some attitude therapy from mell0w-guy Tony Dungy, cuz, the SIMPLE facts are, if you would have simply chased the Steeler receivers around the field as closely as you stalked that official, you MIGHT have actually had a tackle or two and not have been feeling so inadequate with less than 4-minutes left, Ya Jagoff!