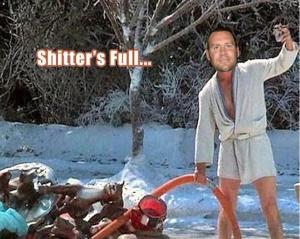 Thanks to @JohnLucas18 for the Pic of Ben!

The Steelers are the AFC North Champs!  Should we fire Haley?  Fire Tomlin?

Wait! No hate today.  Here’s a post-game follow-up and a way to beat the Squirrel Hill Tunnel Monster Fraidy-cats.

1) Ben played with “a stomach virus” last night.  Key footage was him running into the locker room right after the Steelers first possession. Couldn’t see his face but he definitely had those “Oh GAWD I’m gonna @#@# myself and I have bright yellow pants on” fast-feet as he was running down the steps.  Thus-ly, the fantastically, magical Christmas Vacation, Cousin Eddie imagery from Twitter-er-er John Lucas.

2) Le’Veon Bell left the game with some kind of knee injury.  All hospital emergency departments were checked and it would appear 2,421 people checked in with chest pains, depression and stroke symptoms within 20 minutes of the play.  All 446 Pittsburgh area bridges will have police, please-don’t-jump-its-only-game guards if by chance the report on Le’Veon Bell comes back that he cannot play against the Ravens next Saturday.

Watching Le’Veon Bell BEFORE the injury gave me an idea.

If people drove through the Pittsburgh tunnels like Le’Veon Bell powers through the defense, we’d have no traffic problems.

So that’s it, from now on, if you see a car jamming it’s way through traffic at the Squirrel Hill Tunnel entrance, banging off of the cars in front of it, doing a spin-a-rama off of the left, rear fender then crossing the double-white line and headed down the other lane with the driver’s head down and buried into the dashboard, it’s ME!

Then when I get to the other end, I am going to pull my car to the middle, get out and walk around shaking my head side-to-side, pointing eastward and pounding my chest!  Everyone, DRIVE LIKE Le’VEON…. 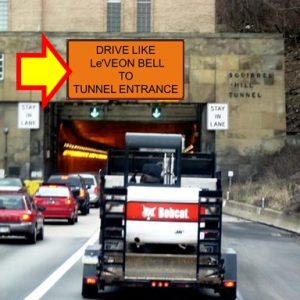 Hey…. we get to go against the Ravens next week… whodda thunk it YaJagoffs!!!!

Yesterday on Facebook, we asked you all to pick the score and winner of the Steelers/Bengals game.

The winner would get a $50 donation to their favorite nonprofit organization.

There were multiple correct answers of 27-17 so we did a raffle and the winner is…..

Cybil, email us at YaJagoff (at) verizon (dot) net with the name and address of your favorite non profit organization. Subject Line (BENGALS)