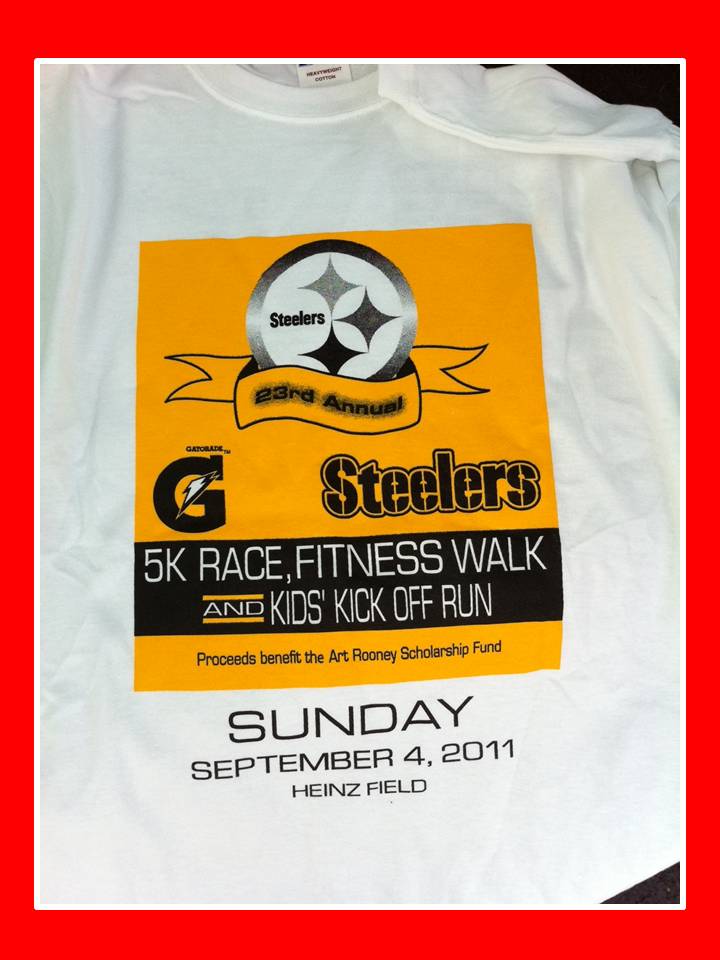 Happy Labor Day!  (And we mean that DESPITE what you might think from this earlier post about the Verizon Strikers!)

Today’s post is going to sound like one of those “5:30am Breaking News on TV” stories.  You know, “We are live in front of the scene.  We are told that there has been an incident here but details are scarce so we will be back to you with more information in the next half hour as soon as we can find someone to talk to.  Reporting live and EXCLUSIVELY…”

You see, we don’t remember the guys name for this and we failed to obtain a picture of him because we couldn’t figure out where he was standing and talking on the microphone!!!!

The 23rd Annual Steelers/Gatorade 5K was yesterday.  It was a fun run as all of the previous years.  And it benefits the Art Rooney Scholarship Foundation – a great cause.  BUT……………..

For some reason, those organizing this event moved the start of this year’s race from the previous location, the 4-lane road around Heinz Field, to the Gateway Clipper landing area next to Heinz Field.  Get the picture?  They moved the start of the 5k race, with about 8,000 registrants, from a 4-lane street that runs the entire side of Heinz Field to a river-side slab of concrete that’s about the same square footage as a downtown bus shelter!

Enter our man, the Race Director who kept yelling at people over the microphone as he was trying to stagger the start of the race, “Step back from the start line!  All you’re doing is crowding and making it worse!” “Everybody will get their turn”  “We will be starting the race in corrals!”  “People, you’re going to have to wait your turn!!!!”  “Remember, if you want to pass someone, pass on the RIGHT!”

WHAT?  Yep, he said “pass on the right” AND a bunch of OTHER stupid berating things to the thousands that paid $25 to come and enjoy what USED to be a fun event!

After the race, we figured out who this guys was. He’s the RACE DIRECTOR.  Even more, he looks just like our high school gym teacher that we used to hate – grey crew cut, fu manchu mustache, old-guy muscles and that I’m-gonna-put-a-whoopin-on-ya look in his eyes.  Not one molecule of “customer service” in him!!!!!!

Hey, Mr. No-Name-and-No-Picture-But-That’s-Our-Fault-Ex-Gym-Teacher-Race-Director, we almost failed gym with a guy like you but we did pass math class.  Thanks to that math class we have one up on you when it comes to ‘ciphering “people per square foot!”

But without acting TOO snooty with our high school algorithims and stuff, we have one little common sense tip for next year so that you won’t have to yell and scream stupid stuff on your microphone every 5 minutes for a solid half-hour scolding a hot-sticky-ready-to-run crowd:  START THE RACE IN AN AREA THAT ACTUALLY HOLDS 8,000 PEOPLE, YA JAGOFF!!!

In this article: Steelers Gatorade 5K