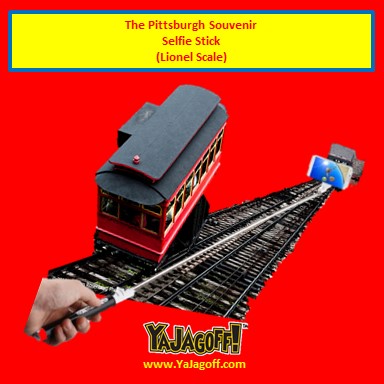 Do you think we’re going to survive the selfie stick craze?

Quite possibly we will if we can come up with souvenir selfie sticks that replicate things like a retractable Duquesne Incline or our subway..(insert joke here about how the Pittsburgh Subway length would be actual size of a selfie stick).

But personally, I don’t think we are going to survive the selfie stick craze without a riot in some public place.

Smart phones have already gotten to the point that people know zero boundaries on how they invade on everyone else’s space…example, people that walk around airports with earbuds in each ear and over-modulate to the cohorts on the other end of the phone making us all suffer through their sales presentation recap conversation.

Somewhere along the way, selfie sticks will probably even get longer and then invade the drone airspace while the drones are invading aircraft space and, eventually, we’ll maybe just have drone selfies.

I can even see a golf club… probably one of those drivers that look like a half of a bowling ball…that has a selfie stick bracket built inside of the head.

So, let’s just all agree… step away from the selfie sticks!  If we really and truly need them in our lives,  eventually, humans will adapt to the environment to the point that are arms evolve into being 36″ longer, Ya Jagoffs.