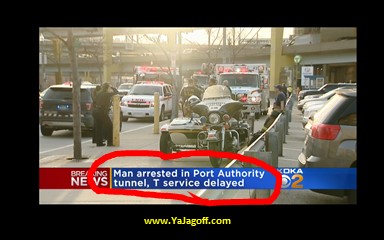 You know what it’s like trying to get out of downtown Pittsburgh on a weeknight! Especially on the first super nice day in the last bajillion-kajillion days!  You want OUT!

And them sometimes, some jagoffs get in the way:

But, our man Joe Maxwell (I always feel that, somebody’s waaaaatchin’ meeeee!… you’re welcome for that ear worm) took the downtown evening rush hour jagoffery to a new level!  He walked through the Subway, i.e the “T” which has less total track length than my grandfather’s Christmas Lionel Train set up, and shut down all traffic through the tunnel. See full story on KDKA-TV.com.

Yep! Just kind of decided to take a subway saunter… on the tracks and in the tunnel thusly shutting down “T” service for part of the evening rush hour.  Allegedly he appeared to be intoxicated according to authorities. (Oh really?)

Way ta go Joey! You single-handedly ticked off at least 1/3 of the day’s go-homers!  That’s almost as many as friends, on either side of the aisle, that you would lose INSTANTLY by making a politically motivated Facebook post or choosing a fav pizza place!

Joe.. next time ya wanna walk the tracks, head to Kennywood Park… you can learn from the best, Bryan and Geno from the Rick Sebak video!!!  “You allright Gino?” Haaa… ok, stay away from Kennywood Park too… we don’t want you doing something stupid and holding up the Potato Patch line. How about just NOT walking around IN PUBLIC when you’re ALLEGEDLY intoxicated.

Just stay home and sleep it OFF… YaJagoff!