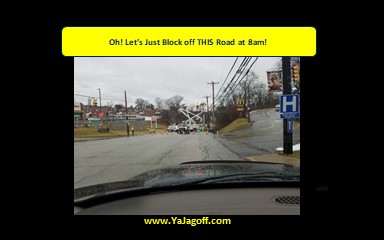 Disclaimer: I get it… roads, wires and stoplights have to be maintained.

Disclaimer: Sometimes road, wire and stoplight emergencies happen and roads have to be blocked off without notice.

Disclaimer: We all appreciate the peeps that have to work outside, in the nasty weather all day or all night on this stuff… even the flagger-person that let’s everyone go but turns the stop sign on YOU!

That said…. what the @#$@* was someone thinking with this? In the sleepy little town of Kennedy Township we have a couple of main “arteries.” one of them bifurcates into 2 other main arteries.

Yesterday morning, we all got up and made our way to work or, in some cases, the local retirees made their way to McD’s for the all-day coffee, and BOOM… there this was… the main intersection that breaks into the 2 main paths that head toward downtown just randomly blocked!

No hints, no warnings…. no sign on Monday that might have said, “Hey guys, hey yinz… we are gonna block off this intersection on Tuesday… just wanna give you a heads up since it’s been on our Google Calendar for a coupla weeks and this might @#%/ up your morning commute.” Not even a post on this new-fangled form of communication… social media… (until right before by the volunteer fire department) that said.. “hey.. get ready with your frustrated or mad GIFs…we’re gonna have a road blocked off in your area tomorrow yinz guys! Ya might wanna start out a little earlier tomorrow” I mean.. who in the @*!)* uses that Facebook stuff anyway?

There were workers there.. there were cones set up.. there were flares set up…and this was NOT an emergency issue…. so this was on someone’s calendar… but why not for 9.. or even 9:30am? Why at the height of the 765-car Kennedy Township rush hour?

We get it… ya have to fix things! But how about a little “Hey girl! Hey Girl” or “Hey bub!” heads up before ya block off the main roads… since YOU already knew you were scheduled to be here… Ya Jagoffs!

Thanks to Tom Harbaugh for the pic and for being our Honorary Jagoff Catcher today!