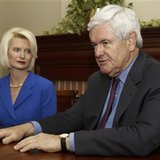 This was a close one.  I was ready to post Punxy Phil as a Jagoff today given the current weather and his Bull @#$@# prediction of an early Spring!  But then I thought, playing along with the legend about Phil is cool but BELEIVING that he was REALLY predicting an early Spring would make ME a stupid Jagoff!

OK.  So Newt Gingrich says he MIGHT run for President.  He also says IF he does, he will make the announcement in front of Independence Hall.  So do ya think he’s running?  DUH!!! (quoting Charlie Sheen).

In the meantime he talks about the affair he had with his young female friend and he DEFENDS it by saying,  “his passionate hard work for his country contributed to his marital infidelity.”  WHAAAAAAT???  He was sooooo patriotic that he mistakenly cheated on his SECOND wife!!! (see article here)  Did she walk into yer office wearing nuthin’ but an American flag????

No matter WHAT party you represent, you HAVE to call this total CRAP-OLA!  However, it does give me an idea!

Hey Newt, if I go dressed as Charlie Sheen to the next Halloween Block Party, can I tell my wife I only did cocaine and crack and had sex with three neighbor ladies IN THE NAME OF MAKING THE COSTUME MORE REALISTIC???  Pretty clever huh?  Maybe I could be your VP???

Newt, stay retired or go get a talk show like the rest of yer cheatin’, lyin’, “I did the country a favor” political buddies, Ya JAGOFF!!!