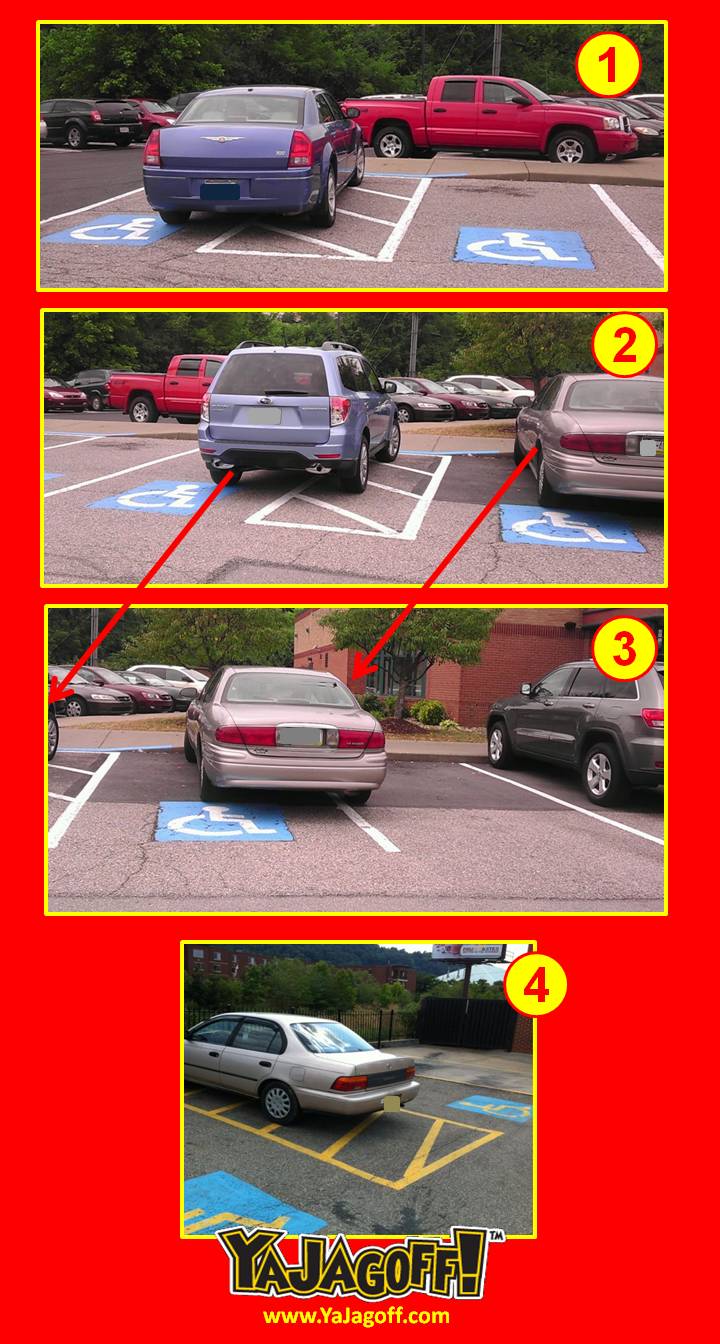 What in theeeeeeeeee world is going on??  Handicap spaces are meant for those that are challenged, PHYSICALLY… not “Parking Challenged!!!”
Here’s a quick description of the “Peter Parker Triple” pic above:

Pics #1-3: Accompanied by this email, “I took these gems while having lunch at the EAT N PARK in Washington PA. Not one, not two, but THREE stellar people all in a row!!! I guess they had to hurry and park to make sure they got the great seats for the Sunday Brunch Buffet!!!!”

Pic #4: Accompanied by this tweet from the Waterworks, “I’ve seen a lot of crazy s$$t when it comes to lazy disrespectful yinzers, but this, I have never seen!” and it goes on to note that there was no “H” sign on the car.

So in JSPU (Jagoff Special Parking Unit) cases 1-3, it’s like the Yawning Myth….. you see one person yawn and then everyone yawns.  So, on Sunday at the Eat n’ Park buffet-parking-race, you see one person park like a .. well..you know.. and then EVERYONE parks like a .. well, you know.  No word on whether or not these were legal “H” parkers but it doesn’t matter, even with the larger spaces these drivers couldn’t get the car through the uprights!  They couldn’t even respect their fellow “H’ers!”

Then in JSPU (Jagoff Special Parking Unit) Case #4, the driver puts his vehicle right between the lines….just the WRONG lines!!  Ane he blocks two “H” spots at a local fast food joint!!  Our Honorary Jagoff Catcher for this pic actually went the extra mile and stayed undercover at the scene to verify the driver (we won’t go into the detailed description but let’s just generalize it as very-lazy-and-sloppy non-H appearance.)

Here’s our summary, given the diagonal yellow lines underneath Peter Parker JSPU Case #4, if this car was sliced like a loaf of Mancini’s Bread it would be a perfect fit!!! (Pass the butter and the Genoa salami please!)

And the Peter Parkers in JSPU Cases #1-3, these are still an open investigation which means we can’t really comment too much.  But what we can say:  when you see a church, you think “nice, good, kind” people…everyone smiling, kissing, giving up alms, RIGHT?  But what in the hell happens to those same people when they are leaving church and racing to be the first in line at the Sunday Eat n Park buffet or to get home from noon mass in time for the 1pm Steelers kick-off?  Where does that Love-one-another-Care-and-be-kind-Share-Turn-the-other-cheek stuff go, Ya Jagoffs?????